In a filing with Bursa Malaysia yesterday, KSL said the parcels of land, measuring 21.81ha, will be used for residential development projects and further enhance its presence in the property market in Johor.

“Once the acquisition is completed, the land bank of KSL Group will be 1,011.71ha in Segamat, Batu Pahat, Muar, Mersing, Johor Baru, Kuala Lumpur and Klang.

The group said the development project is expected to commence in 2024 and is envisaged to spread over 10 years.

“Accordingly, an estimated gross development profit of between RM157mil and RM207mil is expected to be derived for the group over the duration of the said development,” it said

The property group said the disposal is expected to generate a gain of RM1.8mil upon completion after deducting all the estimated expenses for the exercise.

The disposal is expected to be completed in the fourth quarter of 2022.

“The proposed disposal is in line with the group’s strategy to focus more on the M-Series type of residential land for development of affordable properties that are in line with current market demand,” it said in reference to one of its property products.

Mah Sing said the disposal of the land and replacing it with the M-Series type of land with a faster turnaround time would help optimise the efficiency of the group’s landbank.

The exercise has no impact on the issued share capital and the shareholdings of the substantial shareholders of Mah Sing as it does not involve any issuance of new ordinary shares in the group, the property developer said. — Bernama 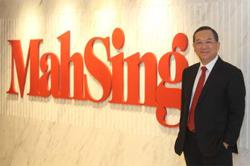