’s growth prospects in the near term, despite some headwinds.

TA Research said beyond near-term headwinds from China lockdowns and geopolitical tensions, which have added pressure on global supply chains, it remains optimistic on the company’s growth prospects.

The research house added that this was underpinned by Inari’s core radio frequency (RF) segment, amid the nascent 5G smartphone upgrade cycle and customer diversification programmes.

TA Research, which has a “buy” recommendation on the company with a target price of RM3.30, said it also views upside for Inari from potential merger and acquisitions and large-scale acquisitions, supported by its robust net cash position.

The group recorded revenue of RM336.2mil in 4Q22, down 7% compared to the same quarter in the previous year.

Meanwhile, CGS-CIMB Research has cut Inari’s financial year (FY) 2023-2024 EPS by 10% to 11% to account for softer mobile device demand amidst risks of a slowdown in the global economy in 2023. 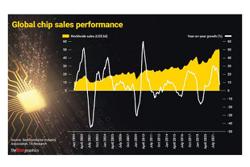