High-growth and technology stocks such as Amazon.com Inc and Alphabet Inc declined more than 1% in trading before the bell as U.S. Treasury bond yields climbed.

Banks also fell and were on track to end the week lower, potentially snapping their six-week winning streak.

"Lot of individual not so great news here today and it's just manifesting in an overall market selloff," said Dennis Dick, retail trader at Triple D Trading, pointing to weak results from Deere & Co, inflation numbers in Germany and a selloff in meme stocks and cryptocurrencies.

"You're getting a little bit of profit taking (after) a pretty good run for the last six weeks."

Kansas City Fed President Esther George said she and her colleagues will not stop tightening policy until they are "completely convinced" that overheated inflation is coming down.

The U.S. central bank has raised its benchmark overnight interest rate by 225 bps since March to fight four decade-high inflation.

Stocks have wavered this week after the Fed's minutes from its July meeting were released on Wednesday, as investors tried to get an accurate reading of the central bank's monetary policy tightening path.

While the Dow and the S&P 500 are on track to post slim weekly gains, the tech-heavy Nasdaq is headed for its first weekly loss after four straight weeks of gains.

The benchmark 10-year Treasury yield was on track to post its third week of gains.

Focus next week will be on Fed Chair Jerome Powell's speech on economic outlook at the annual global central bankers' conference in Jackson Hole, Wyoming.

Cryptocurrency and blockchain-related stocks dropped following a sudden selloff in bitcoin, with crypto exchange Coinbase Global and miner Marathon Digital down 9.2% and 11.5%, respectively.

Bed Bath & Beyond Inc plunged 39.3% as billionaire investor Ryan Cohen exited the struggling home goods retailer by selling his stake following a stunning rally in the stock this month.

General Motors Co rose 1.7% after it said it would reinstate quarterly dividend payouts, suggesting the automaker was confident it was past the worst risks from the pandemic and the economic turbulence of the past several months. - Reuters 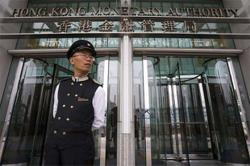