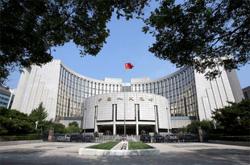 SHANGHAI: China stocks fell on growth concerns on Monday after factory and retail activity slowed in July even as the central bank unexpectedly cut key rates to support the COVID-19 hit economy.

The CSI300 index and the Shanghai Composite Index both slipped 0.1% at the end of the morning session. Some growth-oriented stocks, however, gained from lower rates.

The People's Bank of China (PBOC) on Monday lowered the rate on one-year medium-term lending facility (MLF) loans to 2.75% from 2.85% and the seven-day reverse repos rate to 2% from 2.1%.

"The move reflects that policymakers were shocked by the July credit data as well as a comprehensive deceleration in economic activities.

"Economic activities weakened in July. Domestic demand softened due to COVID outbreaks in many cities and the worsening sentiment in the property market," said Zhiwei Zhang, Chief Economist at Pinpoint Asset Management.

The unexpected rate cuts soothed some worries in the stock market about tight liquidity, with the blue-chip CSI300 jumping as much as 0.7% in early morning trade before gains were erased.

"The rate cut is likely to assuage the market concern that Beijing may start to tighten liquidity on the margin. As such, the growth-oriented stock rebound may be prolonged," Clocktower's Wang said.

However, financials and consumer staples both retreated 0.9%, while tourism-related firms dropped 1.4%.

Tech giants listed in Hong Kong slipped 0.3%, after five U.S.-listed Chinese state-owned enterprises (SOEs) whose audits are under scrutiny by the U.S. securities regulator said on Friday they would voluntarily delist from the New York Stock Exchange.

Beijing and Washington are in talks to resolve a long-running audit dispute which could result in Chinese companies being banned from U.S. exchanges if China does not comply with Washington's demand for complete access to the books of U.S.-listed Chinese companies.

"As for private enterprises listed in the U.S., whether they may be allowed more discretion to cooperate with the Public Company Accounting Oversight Board (PCAOB) audit inspection will probably depend on the sensitivity of data in their audit papers," said Weiheng Chen, partner and head of Greater China Practice at Wilson Sonsini. - Reuters