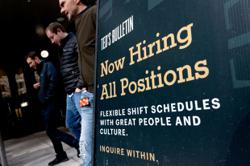 Initial claims for state unemployment benefits rose 6,000 to a seasonally adjusted 260,000 for the week ended July 30, the Labor Department said on Thursday. Economists polled by Reuters had forecast 259,000 applications for the latest week.

The number of people receiving benefits after an initial week of aid increased 48,000 to 1.416 million during the week ending July 23. The so-called continuing claims are a proxy for hiring.

The economy contracted 1.3% in the first half, meeting the standard definition of a recession. But with the labor market still churning out jobs at a brisk clip and layoffs low, the economy is not in recession, though overall momentum has cooled. Wild swings in inventories and the trade deficit tied to snarled global supply chains have been largely to blame for the two straight quarterly declines in gross domestic product.

There were 10.7 million job openings at the end of June, with 1.8 openings for every unemployed worker.

So far this year, employers have announced 159,021 layoffs down 31.3% from the same period last year and the fewest in January-July since 1993.

The Federal Reserve last week raised its policy rate by another three-quarters of a percentage point. The U.S. central bank has now hiked that rate by 225 basis points since March.

"Job cut levels are nowhere near where they were in the 2001 and 2008 recessions right now, though they may be ticking up," said Andrew Challenger, senior vice president of Challenger, Gray & Christmas. "If we're in a recession, we have yet to feel it in the labor market."

The claims data has no bearing on July's employment report, which is scheduled to be released on Friday. According to a Reuters survey of economists, nonfarm payrolls likely increased by 250,000 jobs in last month after rising by 372,000 in June. - Reuters