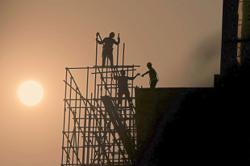 Progressing well: People walk near the Huangpu River in Shanghai. According to data from the National Bureau of Statistics, China’s fixed-asset investment growth improved to 5.8% year-on-year in June from 4.7% in May. — AFP

Before daily operations begin on Thursday on the Beijing-Shanghai Railway and the Shanghai-Nanjing Intercity Railway, an overpass of Benfa Road in Changzhou, Jiangsu province, can be seen above the rails of the two busiest railways.

It marks not only a milestone for the road project as it is a success after numerous challenges, but also another valuable example for all other construction teams facing similar technical issues nationwide.

CR24, the builder of the bridge, attributes the construction success of the overpass section to its tailor-made solutions using steel box girders and digitised tools.

Bringing no disruptions to normal operations of the two railways, the builder managed to have tonnes of steel box girders “gently walk” 86 metres to their destinations, with errors controlled within only three millimetres, said Xie Yuanfang, a project designer with the CRCC.

He added that to safeguard the daily operations of the neighbouring railways, each of which has more than 110 trains running through, CR24 construction workers can only take advantage of hours-long train maintenance time to build the overpass section every day.

“Construction of the overpass section was achieved with the help of two 150-tonne jacks, and 400-tonne and 600-tonne heavy object movers each of four. The steel box girder gently moves at a speed of 30 miles per hour till it reaches its destination,” Xie said.

Xie said the entire push-up process took around seven hours, over three days – from Thursday to Sunday – due to concerns over the normal operation of the two railways.

Being a “tailor” for each of its infrastructure projects has become a key element leading to project success for his team, which calls for many innovative solutions covering all specific construction conditions, Xie said.

Xie’s words are well reflected in another project in Shenzhen, Guangdong province, where a shield tunnelling machine has started operations recently at the second phase of Shenzhen Metro Line 16, laying a solid foundation for the larger-scale tunnelling work in the second half.

To ensure a successful commencement of tunnelling, CR24, together with the future operator of the metro – Shenzhen Metro – completed adequate preparation work, such as arranging high-quality building resources, transportation plans.

CR24 also managed to complete the hoisting, installation and commissioning of the tunnelling machine, which are key to a safe, efficient start to the tunnelling work.

In the shield tunnel section there are many challenges to overcome, such as river tributaries, workshops, highways and the Wutong River – all located at the underpass in sections of the project, the company said.

“In response to these problems, and with reference to previous construction experience, our engineers carry out targeted designs of the shield tunnelling machine, including designs to improve the rigidity, strength and bearing capacity of the cutter seat to ensure the efficiency of hard rock breaking.

“We also adjust the distance between the front cutters and increase the hardness of the full-section excavation,” said the CR24 project manager who declined to be named.

With a total length of some 9.46 km, the fully underground second phase of Metro Line 16 starts from Dayun Station (not included) and ends at Xikeng Station, containing eight stations – including two transfer stations – in total. So far, construction of six of the stations’ main structures has begun.

Infrastructure investment is becoming a strong foothold for China to stabilise growth. 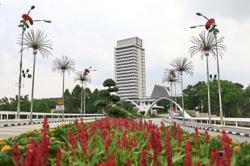