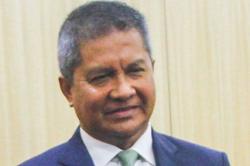 Mavcom executive chairman Datuk Seri Saripuddin Kassim said the aviation industry has made further progress in its recovery from the pandemic, following the easing of travel restrictions.

KUALA LUMPUR: Total air passenger traffic has surged 415.6% to 8.7 million passengers in the first quarter of 2022 – a sign that the local aviation industry is on a gradual but steady recovery path.

In a statement yesterday, the Malaysian Aviation Commission (Mavcom) said the surge in air passenger traffic could also be attributed to the low base in the first quarter of 2021, which recorded 1.7 million passengers during the period.

“Passenger traffic was significantly driven by domestic travellers who accounted for 88.8% of total traffic in the first quarter of 2022. As of May, Malaysia’s year-to-date air passenger traffic stood at 16.3 million, signifying a 574.6% growth compared with the same period in 2021.”

It said international air passenger traffic reached one million in May, the first time since March 2020. Total cargo volume recorded a 5.9% year-on-year increase in the first quarter of 2022, driven by the return of belly cargo capacity following the gradual resumption of international flights.

“This translated into a growth in cargo volume to 5.1 billion in terms of freight tonne kilometres (FTK), up from 4.8 billion FTK during the first quarter of 2021. Further supporting this expansion was the solid growth seen within the eCommerce industry and the electrical and electronics sector,” it said.

In the same statement, Mavcom executive chairman Datuk Seri Saripuddin Kassim said the aviation industry has made further progress in its recovery from the pandemic, following the easing of travel restrictions.

“With the country’s international borders having reopened since April, we have continued to see an uptick driven by the pent-up demand for travel. While we understand the public remains cautious in the face of global conflicts and existing economic uncertainties, the commission remains positive that the aviation sector will continue to recover in 2022 with the right measures in place.”

On its outlook for the rest of the year, Mavcom is predicting passenger traffic to increase between 200% and and 350% year-on-year, representing an estimated 32.6 million to 49 million passengers. For air cargo traffic, the commission expected the segment to expand between 3.9% and 6.7% year-on-year, translating to 21.5 billion and 22 billion FTK.Mavcom also noted a divergence in domestic and international airfare trends since the beginning of the pandemic.

“On average, domestic airfares for the economy class in Asean, Australia and China have mostly been below pre-pandemic levels, while international airfares for the same countries recorded a significant hike and have remained above 2019 levels.”

Additionally, Mavcom said it had received a total of 22 Air Traffic Right (ATR) applications as of March 31. Of the 22 applications, 21 were approved, representing a 95.5% approval rate. The commission said 13 ATRs were allocated for international routes.

which was accorded one ATR.

“This signifies an encouraging development in the continual recovery of Malaysia’s aviation industry,” Mavcom said.