In a statement, the engineering consultant said the 53.5km section consists of tunnels, viaducts, at-grade sections and stations.

The VO pertains to the letter of appointment HSS Engineers received from China Communications Construction (ECRL) Sdn Bhd in December 2017 to provide supervising consultancy services for infrastructure works from Ch 0+000 to Ch 231+500 for a total contract sum of RM82.5mil.

According to HSS Engineering executive director Sharifah Azlina Raja Kamal Pasmah, overall construction works for the ECRL were well underway with reported progress of 28.57% as at April 2022.

"We are heartened by the opportunity to reprise and even expand our role to carry on the project's momentum, especially in the crucial linkage in the Klang Valley," she said.

The project works are targeted for completion by the fourth quarter of the financial year ended Dec 31, 2027.

With the latest contract win, the group said its unbilled orderbook stands at RM530mil year-to-date, which will provide earnings visibility until 2027. 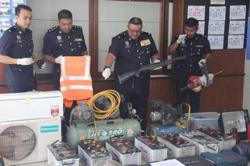