In a statement today, Maybank Malaysia’s community financial services head Datuk Hamirullah Boorhan said the expansion of the mobile bus banking service is in line with the group’s efforts to further enhance financial inclusion for customers in rural areas.

He said the service offers customers greater convenience and easier access to financial services, helping to reduce their travelling time to perform their banking obligations.

"We are constantly looking for ways to improve our offerings as well as to help overcome the challenges faced by our customers in remote areas, such as in the districts of Maran, Gambang, Pekan, Kuantan, Ulu Lepar and Kuala Pahang," he said.

According to Hamirullah, the previous routes received growing support from the communities served, registering an average of 20 per cent growth in the number of customers served over the last three years.

"With the addition of these two new routes, we expect to serve at least 15 per cent more customers each year, and we will look into the possibility of expanding this service to more areas if feasible,” he said.

The 10 routes cover about 500 kilometres, each location now being served on a fortnightly basis.

Introduced in 1978, the Maybank mobile bus service has been providing basic banking services to communities residing in remote areas which are underserved and have limited or no access to banking services. 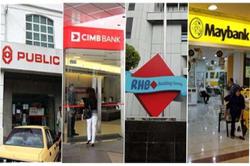