It was a brief moment of levity in a string of major international conferences almost back-to-back. First EU leaders met in Brussels, then the G7 in Germany followed by the NATO summit in Madrid, all three events designed to showcase Western unity after Russia’s invasion of Ukraine. (Pic shows President Biden and other leader at the G7 summit. - Reuters)

LONDON: As G7 leaders gathered at the start of a two-day meeting in Bavaria on Sunday, they joked about their muscles and whether to remove their jackets and mocked Russian President Vladimir Putin for his shirtless horseback photoshoots during the 2000s.

It was a brief moment of levity in a string of major international conferences almost back-to-back. First EU leaders met in Brussels, then the G7 in Germany followed by the NATO summit in Madrid, all three events designed to showcase Western unity after Russia’s invasion of Ukraine.

On the other side of the world, meanwhile, China last week chaired a largely virtual meeting of BRICS emerging nations (Brazil, Russia, India, China and South Africa), with Kremlin and Chinese media contrasting the 3 billion people represented by those nations with the 770 million in the G7.

It is a division starkly exposed and widened by the conflict in Ukraine, both by accident and deliberate action. While Western states have moved to sanction Russia and attempt to cut it from the global economy, emerging nations have been more focused on food and fuel supplies – a lifeline that the Kremlin and increasingly China have been eager to exploit.

For the West, this week has been heavily Russia-focused. The EU meeting saw Estonia, Latvia and Lithuania complain that existing NATO planning would simply allow them and the relatively small NATO forces on their territory to be overrun in an initial Russian assault, demanding dramatically increased forces and planning to fight off any initial attack.

The NATO summit saw pledges to do just that, amid discussions of raised defence spending and a new pledge to deliver a response force of 300,000 troops to face any Russian assault on its Eastern European neighbours. It has also seen more pledges of support for Ukraine, now also a candidate for EU membership.

Critically, it has also seen Turkey drop its objections to Sweden and Finland joining NATO.

This week made more explicit a long-building Western and particularly U.S. theme – already growing before the COVID-19 pandemic but now supercharged in its aftermath – that while Western states do not seek confrontation, they believe one is now under way with an increasingly authoritarian and aggressive Moscow and Beijing.

That projected unity – including greater defence coordination, new sanctions on Russian gold and of a potential price cap on Russian oil exports to hit the Kremlin’s coffers further – includes outreach to non-aligned, less aligned and other developing states, often in regions where China and now Russia see themselves as gaining influence.

On June 26, the G7 announced its $600 billion Partnership for Global Infrastructure and Investment, widely seen as a competitor to China’s long-running Belt and Road Initiative of loans and infrastructure building, in some cases now threatened by economic crisis and potential or actual defaults in the face of post-invasion rising fuel and food costs.

In his opening speech at the June 23 opening of the BRICS meeting – attended virtually not just by Brazil, Russia, India, China and South Africa but also a host of smaller countries – Chinese President Xi Jinping praised their “vitality” and “resilience”, urging them to resist “Cold War mentality” and “small circles built around hegemony”.

Putin’s messaging was even more aggressively anti-Western, accusing the U.S. and its allies are wanting to build a new global economic system and accusing “certain Western states” of creating the current food crisis through their sanctions.

Meetings for the Russian leader in the last week included with Belarus counterpart Alexander Lukashenko focused on raising fertiliser supplies, as well as with Brazil’s Jair Bolsonaro, while a first post-COVID trip outside Russia to central Asia will see him in several former Soviet states.

While last week’s EU meeting concentrated mostly on internal bloc issues, both the G7 and NATO summits have also seen significant outreach towards the developing world. BRIC members India and South Africa were both invited to attend the G7, alongside Senegal President and African Union chairman Macky Sall, a clear effort to keep all three non-aligned in the face of a concerted diplomatic charm offensive from Moscow.

The NATO meeting included representatives from Japan, South Korea, Australia and elsewhere and included specific focus on the rising threat of China alongside Moscow.

These dynamics will be more complex in November, when Indonesia hosts the next G20. Both Putin and Xi have signalled they will attend in person, and Western states look unlikely to boycott and risk that forum becoming dominated by Moscow and Beijing.

Much will depend on whether relations continue to deteriorate or stabilise, as well as how the battlefield evolves within Ukraine. Thursday saw a Russian withdrawal from the long-contested Black Sea Snake Island, described by Moscow as a “gesture of goodwill” that might open the door to resumed grain exports from Odesa.

In another apparent de-escalatory move, EU officials said normal rail shipments through Lithuania to the Russian enclave of Kaliningrad might resume through Lithuanian territory within days as a result of a compromise deal hammered out between the EU and Baltic states. Whether Lithuania buys into this is another question, but after the major pledges of increased military aid, the Baltic states may be feeling more secure than late last week.

None of this will stop the bloody fighting on the ground, where Moscow, Ukraine and its Western backers all believe that they can still achieve what they would view as victory.

But it may be a reminder that all sides cannot escalate unendingly without risking a catastrophe that hurts them all.

** Peter Apps is a writer on international affairs, globalisation, conflict and other issues. - Reuters 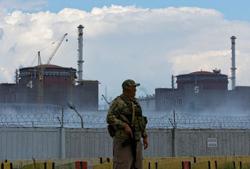