LONDON: Global shares were higher on Tuesday while oil prices firmed following China's decision to ease some quarantine requirements for international arrivals that raised hopes for stronger growth and a revival in demand for commodities.

China slashed the quarantine time for inbound travellers by half in a major easing of one of the world's strictest COVID-19 curbs, which have deterred cross-border travel and resulted in international flights running at just 2% of pre-pandemic levels.

Asian shares rose after the announcement and European stocks were firmly in the green which sent the MSCI's benchmark for global stocks into positive territory and on track for its fourth consecutive daily gain.

China's strict zero-COVID regulations have been a drag on activity in the world's number two economy, but an easing of travel restrictions and reopening of major cities from lockdowns boost optimism that growth can get back on track.

"It's not enough to lead to a very robust recovery, but it's definitely going to be positive incrementally."

The pan-European STOXX 600 was up 0.7% at a two-week high, boosted by oil & gas and mining stocks as commodity prices benefited from hopes of resurgent demand from top metals consumer China.

U.S. stock index futures were higher with S&P 500 e-minis up around 0.5%, but the outlook for developed market equities remains challenging as central banks attempt to balance stubbornly high inflation with slowing growth.

"Equity markets will not be out of the woods until central banks shift their rhetoric to a less hawkish stance," said Salman Baig, portfolio manager, cross asset solutions, at Unigestion

"Unfortunately for many investors, such a pivot will likely not happen until after the economy has slowed down sufficiently to bring inflation on a sustainably downward path."

Lagarde said the ECB will move gradually when it begins raising rates but with the option to act decisively on any deterioration in medium-term inflation, especially if there are signs of a de-anchoring of inflation expectations.

Euro zone government bond yields pushed higher after Lagarde's comments as investors remained focused on inflation risks and monetary tightening, with Germany's 10-year yield, the benchmark for the bloc, up 11 basis points at 1.658%.

The dollar index, which measures the greenback against a basket of six currencies, was little changed at 103.99.

"A seam of tight supply news bolstered the (oil) market," said analysts at Commonwealth Bank of Australia. "Political unrest might curtail supply from a couple of second-tier producers, Ecuador and Libya. And then there's the G7's proposed price cap on Russian oil." 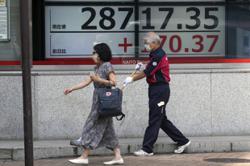