In a late May teleconference to about 100,000 Communist Party cadres, premier Li Keqiang made his position clear – the economy was headed for a hard landing and municipals must put their precious fiscal dollars to help stabilise it. But Li’s urging would have no bite unless president Xi Jinping(pic), China’s most powerful politician in decades, expressed similar sentiments in public town squares.

A company is in distress. Its financials are in shatters. Its brand value is being questioned. The chief executive officer has a broad blueprint to revamp and he has the support of some board members. But for a complete re-branding, he needs the approval of the chairman first.

This is a process that distressed assets managers are all too familiar with. It’s also a good framework for investors to use when they think about China.

In a late May teleconference to about 100,000 Communist Party cadres, premier Li Keqiang made his position clear – the economy was headed for a hard landing and municipals must put their precious fiscal dollars to help stabilise it.

But Li’s urging would have no bite unless president Xi Jinping, China’s most powerful politician in decades, expressed similar sentiments in public town squares.

Xi was seen by the outside world to have made two serious mistakes this year. First, his persistence with Covid-zero – and the resulting citywide lockdowns – sent the domestic economy into free fall.

In recent days, Xi looked as if he may be adjusting his hawkish stance – or at least that’s what some investors are betting on.

On Covid-zero, there were two watershed moments. During a trip to Sichuan province in early-June, the president told local officials to “effectively” keep a balance between virus containment and economic stability.

He also said he was “very concerned” with young college hopefuls finding work. An estimated record 10.8 million will be graduating into a weak labour market over the next few weeks.

At the BRICS Business Forum on Wednesday, the president reiterated the call that China would “strive to meet the economic and social targets for this year”.

China had earlier announced plans for growth of “around 5.5%”, a number that analysts said is out of reach. There were also intriguing signals on the Russia front.

On June 14, it was announced that Le Yucheng, a top Russian-speaking diplomat, had been appointed deputy director of the National Radio and Television Administration.

The decision to remove the pro-Russian Le was seen as a way for Beijing to distance itself from Moscow, whose invasion of Ukraine has been both widely condemned and disastrous for the global economy.

These steps set the stock market on fire. In the past, tech companies were big employers of fresh college graduates – were Xi’s comments a sign that the year-long regulatory crackdown was near the end? To hit the 5.5% growth target, would China double down fiscal stimulus?

And if China indeed repairs its ties with the West, would foreigners invest in its equities again? Be warned, however, that China’s elite politics are so opaque that it is almost impossible to declare with certainty that Xi has changed his mind.

For instance, the day after Le’s transfer –which also happened to be the president’s 69th birthday – Putin and Xi exchanged a phone call. It’s unclear what exactly was said, given Russia and China provided different accounts of what was discussed.

Whatever happened, Beijing has not quite shaken off its perceived commitment to the “no limits” friendship that Xi declared in February.

Meanwhile, the messages from China’s political elites continue to be so subtle that the nuance is easily missed.

For instance, at the BRICS forum, Xi only promised to “strive for” the target. He did not promise to deliver 5.5% growth. He hedged.

But if one thinks of China as a distressed corporate, none of these board intrigues and other twists and turns should be surprising. A lot of political and economic interests are at stake, and only the most patient specialists should invest. — Bloomberg

Shuli Ren writes for Bloomberg. The views expressed here are the writer’s own. 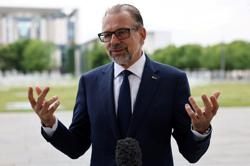