Moving out: A view of the entrance of Walt Disney World in Orlando, Florida. As one of the state’s largest employers because of its theme parks there, Disney is investing US$864mil (RM3.7bil) in the relocation. — AFP

NEW YORK: Florida governor Ron DeSantis may have put a bull’s-eye on special perks that Walt Disney Co has enjoyed in his state for more than 50 years, but he’s keeping his hands off hundreds of millions of dollars in tax breaks recently lavished on the entertainment giant.

DeSantis has signed legislation to end a special municipal district Disney has operated in the state since the late 1960s. It’s part of a drive to punish the company for speaking out against a law, championed by the governor, that bans discussion of sexual orientation or gender identity in kindergarten to third-grade classrooms. 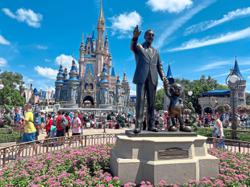