How much would you pay for time? 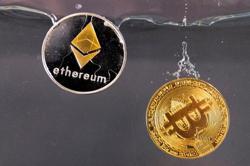 The HO8 model of Hermes is pictured during a media presentation at the Watches & Wonders in Geneva, Switzerland, April 6, 2021. REUTERS/Denis Balibouse

ALTHOUGH this happened to be a data heavy week with the Securities Commission (SC) and Bank Negara releasing their 2021 annual report, do indulge me by letting me focus this week’s column on a lighter topic of an alternate universe, which happens to be an interest of mine – watches.

It is after all, the time of the year again, where Watches & Wonders in Geneva, takes centrestage in the world of horology.

For the uninitiated, Watches & Wonders organised by Fondation de la Haute Horlogerie (FHH) is one of the major international watch exhibitions of the year.

This is where companies of long-standing heritage and prominent brands showcase their new collection for 2022. In the past, Watches & Wonders was known as Salon International de la Haute Horlogerie (SIHH) which together with Baselworld, were a “mark your calendar” events.

Following some of the big brands like Rolex, Tudor and Patek Phillipe pulling out of Baselworld in 2020 to host their own fair, Watches & Wonders remains the main event. In 2020, due to the pandemic, Watches & Wonders was converted to an online format.

This year marks the first time it hosts a first in-person edition since then.

Hence, the excitement is out of the world, no less thanks to the precursor of the recent Omega x Swatch Moonswatch collaboration global launch on March 26th, 2022.In the post-pandemic reality, many businesses are suffering due to prolonged border closures and economic shutdowns.

Many resilient and long-standing businesses shuttered, never to return. 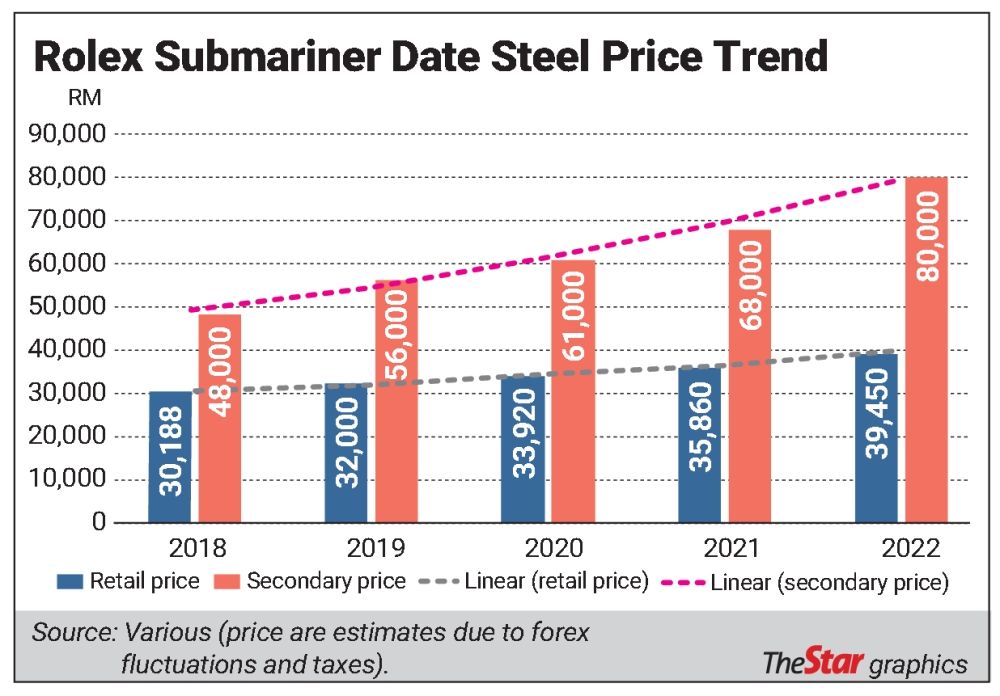 Industries were disrupted and landscape changed across sectors. Yet one market in particular has remained evergreen amidst the tumultuous economic cycle in the past several years. That happens to be the luxury watch market.

To put it in context, global retail and consumer spending dipped during the pandemic.

However, demand for luxury goods (watches, handbags) has been stronger than ever.

The luxury watch market not only outperformed other retail or consumer segments at the primary market but more astonishingly, the secondary market went absolutely berserk.

Taking the classic barometer for the luxury watch market, the Rolex Submariner Date Stainless Steel (Sub), its selling price for the past five years paints the picture for most of the sought-after watch brands and models.

In fact, looking at the price trend in the chart, it is considered rather modest, relative to actual broader situations ongoing in the watch market.

If one were to compare to the “grail watches”, like the discontinued stainless steel Patek Nautilus 5711/1A blue dial, which last retailed for around RM130,000, the secondary market today is in fact asking for above RM1mil.

Many blame the overwhelming demand and low supply that is currently plaguing the industry resulting from the production interruption during the pandemic.

Some attribute it to the higher cost of commodities, which forms part of the cost structure of the watch and inflationary pressure.

There are even claims that new wealth acquired from cryptocurrency and non-fungible tokens (NFTs) are driving the demand.

Others simply believe it is entirely because of the excess liquidity of money supply in the economy which is the direct outcome of loose monetary policies by central banks around the world.

The truth of the matter is the luxury watch market, especially the stainless steel sports models, have been on an upward trend for the past decade. While it is predominantly within the brands of Patek Phillipe, Rolex and Audemars Piguet, we see the spillover effect slowly moving to other brands as well. The reason why these three brands in particular are able to sustain its price is their value proposition in terms of exceptional craftsmanship, long standing heritage and finite supply. They are not owned by conglomerates or listed companies where sales target is the main driver of the business. Quality trumps everything else.

Social media, a product of advancement in technology is another factor that drives demand for the luxury watches. In the past, we only see the high society and gala events where people don such expensive wrist watches. Today, on social media, it becomes an everyday wear. Some even change their wrist watch across various brands and models on a daily basis. It creates a hype and sets a trend amongst the people, regardless of one’s financial means. In keeping up with Joneses, price is hardly a deterrent for one who desires it badly.

Ultimately, the burgeoning upper middle class in society contributes to organic growth in demand. We must understand that as society progresses, income increases and more wealth is spread across the world, the demand naturally grows.

Take Rolex for instance. The annual production is said to be around one million pieces, while Audemars Piguet delivers 50,000 pieces per annum. With the population growing and the affluent increasing by the day, naturally the demand would far outstrip supply.

If we were to track historical data, there is enough evidence to substantiate certain luxury watch models actually hedge against inflation. There are watches that even multiply wealth over time. Most Gerald Genta designed steel sports watches in the 1970s were able to fetch astronomical prices through auction houses such as Sotheby’s or Philips. So it is not at all farfetched to consider watches as a potential asset class to the usual investment assets which are familiar with today. Assuming one has the means, I believe most would not hesitate to purchase a Patek at retail price over say, gold at any given time. Additionally, if cryptocurrencies or NFTs which in my view, holds no intrinsic value and serve no utility other than speculation, can be treated as a potential investment asset class, what more luxury watches. I for one would choose a Rolex instead of bitcoin or dogecoin.

Totem of human endeavour and achievements

Be that as it may, not everything should be measured in dollar and cents. Many a time, value derived cannot be directly measured in monetary terms. Writing for a column in a business paper weekly may probably project the impression that the columnist is one who is fixated on money, but I would like to take this opportunity to share a personal take on my passion for watches.

Quoting Hans Wilsdorf, the founder of Rolex, it is his belief that watches are not a status symbol or reflection of wealth but a totem of achievements for mankind. With every human endeavour, Rolex aspires to be a part of it. This is why we see the Rolex Explorer accompanied Sir Edmund Hillary and Tenzing Norgay when they first conquered Mount Everest in 1953. Another example would be when the Rolex Deepsea was part of James Cameron’s expedition to the world’s deepest point, for the first time in 52 years and only the second time in history. Furthermore, it is not just Nike who built its brand sponsoring the greatest of all time. Rolex celebrates the achievements of many legends through the course of history such as the likes of Jack Nicklaus, Roger Federer and Dame Kiri Te Kanawa.

Personally, a great watch symbolise more than just status or wealth. It is a totem to mark milestones in life, an heirloom for the next generation and simply a wonderful way to preserve precious memories. In essence, to me, owning a watch is the closest thing to buying time. So how much would you pay to buy time? 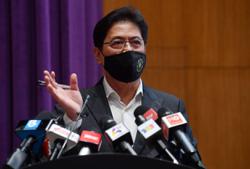