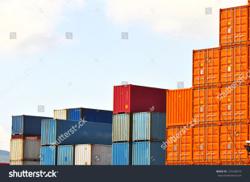 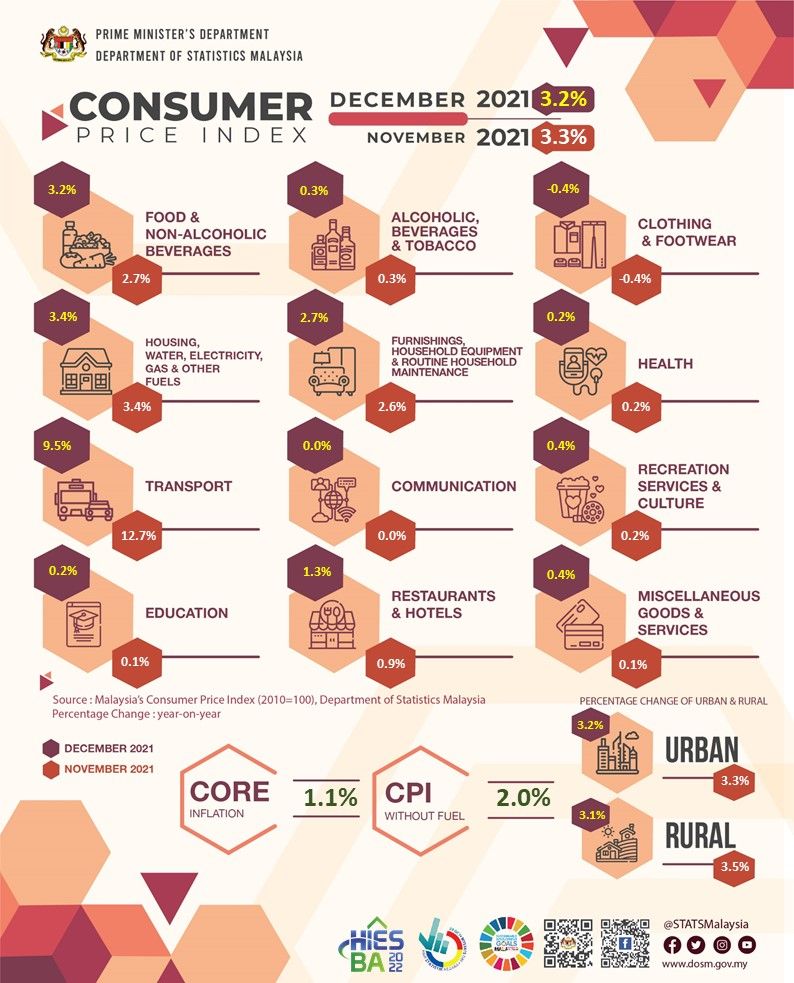 KUALA LUMPUR: Malaysia's Consumer Price Index (CPI) in December 2021 increased 3.2 per cent to 124.5 as against 120.6 in the same month of the preceding year due to the rise in food and fuels prices, said the Department of Statistics Malaysia (DOSM).

In a statement today, chief statistician Datuk Seri Mohd Uzir Mahidin said the increase also surpassed the average inflation for the period 2011 to 2021 (1.9 per cent).

"Other than the increases in food and non-alcoholic beverages group (3.2 per cent) and transport group (9.5 per cent), the inflation rate 3.2 per cent in December 2021 was also attributed by the higher price in housing, water, electricity, gas and other fuels group (3.4 per cent); furnishings, household equipment and routine household maintenance (2.7 per cent) as well as restaurants and hotels (1.3 per cent),” he said.

He also said the increase of food and non-alcoholic beverages group price index at 3.2 per cent was due to higher prices of raw materials for the preparation of cooking at home, such as meat (8.3 per cent); milk, cheese and eggs (5.5 per cent); vegetables (5.0 per cent); oils and fats (4.4 per cent) and fish and seafood (4.2 per cent).

Chicken increased 13.6 per cent and recorded an average price of RM9.54 per kilogramme compared to RM8.40 in December 2020, eggs recorded a double digit increase of 13.5 per cent last month, while milk also went up 3.0 per cent.

In addition, Mohd Uzir said heavy rains occurred in several states throughout December 2021 has led to the increase in food prices, especially vegetables and fish and seafood, attributable to a direct effect of supply shortages due to the weather factor.

However, he said the implementation of Skim Harga Maksimum Keluarga Malaysia by the government during Dec 7 to 31 has eased the inflation of this group from continuing to soar.

"To a certain extent, it has eased inflation compared to November 2021 of 3.3 per cent,” he said.

As for CPI by states, he noted that all states recorded an increase in December 2021, with eight states showing an increase above the national inflation level of 3.2 per cent and highest increase being Terengganu at 3.9 per cent.

Mohd Uzir also said core inflation registered an increase of 1.1 per cent y-o-y in December 2021, contributed by the rise in the furnishings, household equipment and routine household maintenance group (2.7 per cent).

"In terms of quarterly comparison, the CPI increased to 1.2 per cent compared to the third quarter of 2021,” he said.

On a monthly basis, Mohd Uzir said the CPI increased 0.4 per cent compared to November 2021.

He also pointed out that annual inflation rate in 2021 showed an increase of 2.5 per cent compared to a negative 1.2 per cent in 2020.

"The increase in inflation rate is not only happening in Malaysia but is also occurring in other countries,” he added. - Bernama 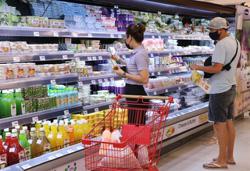 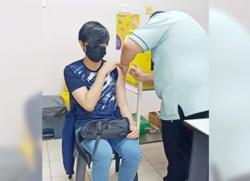