i-City partners Huawei to reinvent the next generation smart city

, has partnered with Huawei Enterprise Malaysia to reinvent the next generation of smart city.

“We ensured that all the homes were fitted with fibre optics. We were the first urban centre with an integrated certified tier-3 ready data centre.

“This gave the development an edge as one of the developments with the highest broadband connectivity in Malaysia. With the basic infrastructure in place, we later scaled the connectivity further by introducing other smart elements such as smart homes and the i-City SuperApp,” Ricky said.

He said Huawei, with its track record of being the technology giant of the east – where half of the world’s smart cities were built, had the right synergy in helping i-City, an AI-forward developer accelerate its mission to becoming Malaysia’s first and most progressive smart city.

Huawei Enterprise Malaysia managing director David Li said: “With the collaboration between i-City and Huawei, we will be working on developing the technology and infrastructure needed to support the bandwidth required in bringing together disparate data from millions of smart internet enabled devices such as smartphones, CCTVs and sensors among others, make sense of these data with advanced analytics technology and then implementing AI and machine learning for decisioning feedback within seconds for i-City to run seamlessly.” 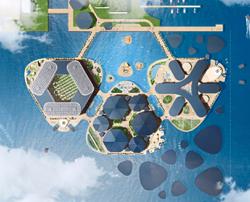