BEIJING: China's factory activity unexpectedly accelerated in December, but only by a small margin, according to an official survey released on Friday, amid disruptions from COVID outbreaks and as the broader economy loses momentum in the fourth quarter.

The official manufacturing Purchasing Manager's Index (PMI) rose to 50.3 from 50.1 in November, data from the National Bureau of Statistics (NBS) showed.

Analysts had expected it to fall slightly to the 50-point mark, which separates growth from contraction.

The world's second-largest economy has lost momentum since the early summer after rebounding from last year's pandemic slump, as it grapples with a slowing manufacturing sector, debt problems in the property market, and small-scale COVID-19 outbreaks.

A sub-index for new orders improved slightly in December but remained in contraction, at 49.7 versus 49.4 in November.

New export orders shrank further, with the sub-index coming in at 48.1 compared with 48.5 a month earlier, indicating fragile overseas demand.

A sub-index for production remained in positive territory at 51.4, but was lower than November's 52.0.

"We expect more liquidity and targeted stimulus packages to be rolled out to support SMEs, high-tech and innovation firms, advanced manufacturing and green industries in order to alleviate the burden on companies, secure growth, reduce risks and offset the slowdown," said Bruce Pang, Head of Macro and Strategy Research at China Renaissance Securities.

ECONOMIC HEADWINDS The wealthy Zhejiang province on China's eastern coast saw a small-scale COVID-19 outbreak in December, which has now subsided, but some firms were forced to suspend production.

In the northwest, the industrial and tech hub of Xian has been under lockdown as a local outbreak continues to spread in the city of 13 million.

Samsung Electronics and Micron Technology , two of the world's largest memory-chip makers, have warned that the ongoing lockdown of the city could affect their chip manufacturing bases in the area.

Activity in China's overall services sector grew at a slightly faster pace in December, rising to 52.7 from November's 52.3.

China's official composite PMI, which includes both manufacturing and services activity, stood at 52.2, unchanged from November.

Debt crises at major real estate developers amid a crackdown on the property sector have hurt an industry critical to China's economic growth.

The central bank has said it will keep monetary policy flexible next year as it seeks to stabilise growth and lower financing costs for businesses amid growing economic headwinds. 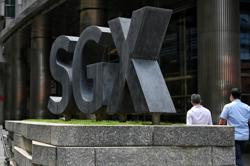