To fight inflation, we must first tolerate it INFLATION is a severe economic woe of late as it is no longer “transitory” as initially claimed.

So, should the government intervene now to tame rising prices? Perhaps not so soon. Since many variables are not within the government’s control, no amount of price intervention would ever suffice to fight inflation.

Understandably, the desire to intervene is immense. We are not only facing high unemployment and a record-low policy rate environment but, more importantly, the government will have to confront fierce political pressure as the 15th general election draw closer.

If the government decides to intervene without hurting short-term growth, a higher debt level is inevitable. Long run wage growth will suffer, pushing the Malaysian economy further away from its high-income dream.

Alternatively, the government may reverse all pandemic-related policies by raising interest rates, increasing tax to reduce money supply, removing incentives, and liberalising the economy’s supply-side through deregulation and free trade. These measures may be effective in the long run but will indeed affect short-run growth.

Make no mistake, things will worsen before they get better as there is no upside to any of these policy options.

“Persistent”, as opposed to “transitory”, is a better word to describe inflation right now. To be clear, no one had predicted supply to trail severely behind demand for so long.

This scenario will likely continue so long as social distancing measures are in place and international borders remain tight. Along with demand-boosting initiatives like Employees Provident Fund withdrawals and other cash handouts, this is a perfect recipe for (very) high inflation.

Besides, the year-on-year producer price index has been trending at double-digits for the past seven months; the longest streak since at least a decade ago. It came in at 10.61% in April 2021 and then peaked at 13.23% in October, the highest since the Asian Financial Crisis.

While it is evident that prices are rising steadily over the past months, it is unclear to what extent will producers pass the buck to consumers. Producers have probably been footing the high production bill amid deficient demand and prolonged lockdowns.

As the economy reopens, producers will inevitably transfer the costs over to consumers as demand picks up. Ergo, it is likely that CPI will trend higher in the coming months, which will in turn, put the government on the very tip of its toes amid looming elections.

We must understand how and why we reached this point in the first place; following prolonged lockdowns, the government deployed fiscal and monetary policies to boost aggregate demand when supply almost grounded to a halt. Simply said, the inflation today is policy induced.

As a result, inflationary pressure is coming from both the demand and the supply sides. From the demand side, the economy has way too much money chasing too few goods.

Malaysia’s M3 Total Transaction Balances (i.e. the total of currency in circulation and demand deposits) is up from RM458bil in March 2020 to RM556bil in October 2021.

This figure represents a double-digit year-on-year growth for 16 consecutive months. For context, Malaysia had experienced higher and longer M3 growth rates in the past but never in the presence of broad-based weakness in the labour market.

From the supply side, inflationary pressure is primarily external, although the low-skilled labour shortage in the market remains a problem.

As far as Malaysia is concerned, there are four scenarios where inflation could rise faster and for longer.

One, if lockdowns were to be reinstated to curb the spread of the Omicron variant, or any other more transmissible Covid-19 variant. Then Malaysia’s macroeconomic performance would likely suffer and, subsequently, thwart the path towards full recovery in 2022.

Two, if input costs remain elevated as producers continue to operate below capacity amid supply constraints, then cost-push inflation is here to stay.

Three, if the overnight policy rate is raised unexpectedly due to external factors. This contradicts the inverse interest rates-inflation relationship because raising interest rates will cause borrowing costs and input prices to increase further amid the slack in the economy. Hence, prices will likely surge rather than decline.

And four, if the government decides to remove the retail oil price cap prematurely as subsidies bill goes up while revenues remain low. To clarify, these are probable scenarios and not necessarily a surety.

Before pursuing the “tried-and-tested” method of increasing subsidies and boosting price control mechanisms, the government should find a threshold to tolerate inflation first.

Intervening too early would lead to higher debt and we will miss the opportunity for reforms. But if the government is too slow to fight inflation overshoot, rising prices will consume growth and lead to stagflation.

The aftermath of “The Great Lockdown” is real. It is easy for the business cycle to be disrupted but rebuilding it will surely be a painful process.

Whether we like it or not, we must tolerate inflation. The real question is whether or not Malaysia is able or willing to accept inflation. If yes, at what level? And if not, there can be no economic reset.

Firdaos Rosli is chief economist at Malaysian Rating Corp Bhd (MARC). The views expressed here are the writer’s own. 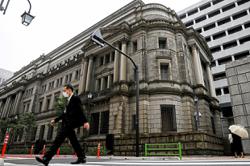