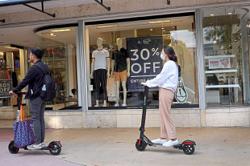 The clearest bond market consequence of Fed Chair Jerome Powell's (pic) sudden change of tune on inflation has been to compress the gap between short- and longer-dated rates, right across the maturity spectrum.

ORLANDO, Fla. : To echo Bob Dylan, the flattening U.S. yield curve shows the bond market knows something is happening, but doesn't quite know what it is.

The clearest bond market consequence of Fed Chair Jerome Powell's sudden change of tune on inflation has been to compress the gap between short- and longer-dated rates, right across the maturity spectrum.

The traditional red flags this raises - looming economic slowdown, interest rates being raised too much or too quickly, deflationary pressures - are well known. But do they still apply in today's utterly unique economic, policy, and public health environment?

The running narrative, fueled by Powell, holds that inflation risks staying higher for longer unless the Fed acts. The overwhelming consensus among bank strategists is to sell Treasuries, pushing the 10-year yield up toward 2%.

But that's not what the bond market is telling us.

To be sure, recession does not appear to be an immediate risk. The spread between two- and 10-year yields remains more than 85 basis points off inverting, the classic pre-cursor to a contraction in economic activity.

But still, this closely watched part of the curve is the flattest this year. More pronounced flattening at the long end of the curve, kinks now emerging at the ultra-short end and rising bond market volatility offer more reasons for caution.

Some of the moves this week bear spotlighting.

The 2s/5s curve is 13 basis points flatter this week, on course for its biggest weekly flattening in over six years; the 10s/30s spread is down to 31 basis points, the lowest in nearly three years; and the 20s/30s curve is showing a record inversion of 8 basis points.

This reflects a flattening trend that has been underway in the bond market for months. But as Jeff Snider, head of global research at Alhambra Investment Partners, points out, this has now been followed by a rare inversion in the Eurodollar rates curve.

Implied yields from Eurodollar futures contracts over the late 2024 - early 2026 horizon inverted slightly on Wednesday, the first inversion of the three-four year part of the curve since 2018. Like 2018, it suggests the Fed should be wary of raising rates.

Snider argues that the balance of risks is tilting "very clearly" toward deflation. Treasury market flows and positions amounting to bets worth trillions of dollars prove this.

"We don't know exactly what will happen or when, but the progression is clear. We have moved much closer to whatever it is," said Snider.

Even without Powell's "pivot" that inflation should no longer be described as "transitory," the current environment was already challenging enough for investors and policymakers.

Trillions of dollars of Fed bond purchases are about to come to an end, inflation is the highest in decades due to global supply chain bottlenecks, the economy is running hot and the Fed is preparing the ground for lift-off on rates.

Yet new COVID-19 variants could still turn all that on its head.

In that light, it is little surprise that investors have dumped stocks for the safety of U.S. Treasuries, and that the plunge in longer-term yields shows investors expect the terminal fed funds rate to be lower than previously anticipated.

U.S. bond market volatility as measured by the three-month MOVE index is the highest since March last year, when the pandemic struck. Excluding that one-off surge, it is the highest in five years.

It is even higher than 2019, when the Fed cut rates, a cycle that would culminate in the previous two years of tightening being completely unwound. This U-turn, which was also preceded by dramatic yield curve flattening and even inversion, will surely be on the Fed's radar this time around.

"That was basically a disaster - so I think the market is over-interpreting his recent comments," said Bill Callahan, investment strategist at Schroders, arguing that Powell's actions will ultimately not be as hawkish as his words.

The yield compression at the long end of the curve is also being exacerbated by "natural" fixed income buyers such as insurance and pension funds, which are mandated to buy these assets to offset their liabilities.

Analysts at Morgan Stanley estimate that pension funds' long-term demand for fixed income assets could exceed $600 billion. This, as much as anything else, explains the persistent downward pressure on long-dated yields, they argue.

A $50 billion inflow, for example, into the 20-30 year part of the Treasury curve has a far greater impact than the more liquid 2-5 sector, and can send a ripple effect through the rest of the curve.

"We think curve flattening is likely to be a persistent theme, only further supported by the fact that we're entering a tightening cycle from the Fed in the coming months," they wrote in a recent note.- Reuters