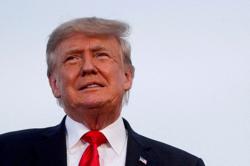 File pic shows Trump getting ready for an interview at a studio.

Former President Donald Trump's new social media venture is seeking to raise up to $1 billion by selling shares to hedge funds and family offices at several times the valuation it commanded in a deal with a blank-check acquisition firm in October, two people familiar with the matter said.

Trump Media & Technology Group, which has yet to roll out the social media app it says it is developing, already stands to receive $293 million if its deal to list in New York through a merger with blank-check firm Digital World Acquisition Corp is completed.

The deal valued Trump Media at $875 million, including debt. Trump Media is now seeking to raise up to an additional $1 billion at a valuation of close to $3 billion, to reflect Digital World's share rally after Trump supporters and day traders snapped up the stock, the sources said.

It is the clearest indication yet that Trump and the Digital World dealmakers are seeking to capitalize on the market euphoria around their venture, which has so far been fueled by its ambitious goals rather than a business that is up and running.

Digital World shares, which were trading down 6% before news of the $1 billion raise, rallied to close up 7% at $44.35 on Wednesday.

The move represents a departure from most PIPE deals, which are typically done at $10 per share, and would result in a much greater dilution of existing Digital World investors.

The sources added that Digital World shares may be valued based on a 20% discount of their 10-day, volume-weighted average price.

The sources requested anonymity because the matter is confidential. Trump Media and Digital World did not respond to requests for comment. Bloomberg News reported last month that the companies were seeking to raise a PIPE without any details on its terms.

Most PIPE transactions are inked before a deal to take a company public is rolled out, and it is far from certain that the companies will raise the entire $1 billion they are seeking following their deal announcement. Many Wall Street firms have snubbed the opportunity to invest, and many of the investors participating in the confidential road shows for the PIPE are hedge funds, family offices and high net-worth individuals, the sources said. Family offices manage the wealth of the very rich and their kin.

Weighing on the deal's appeal is the reluctance of many investors to associate with Trump after he was banned from top social media platforms for encouraging his supporters to participate in the Jan. 6 attack on the U.S. Capitol, which was based on unsubstantiated claims of widespread fraud in last year's presidential election.

Some hedge funds that backed the launch of Digital World, including Saba Capital Management and Lighthouse Investment Partners, have said they sold their shares to distance themselves from the Trump deal.

The deal also faces regulatory risk. U.S. Senator Elizabeth Warren asked Securities and Exchange Commission Chairman Gary Gensler last month to investigate the planned merger for potential violations of securities laws around disclosure. The SEC has declined to comment on whether it plans any action.

Trump Media and Digital World have asked investors to finalize commitments to the PIPE by the middle of December, the sources said.

In a PIPE road show attended by one of the sources, investors were asked to commit between $10 million and $20 million. Neither Trump nor Digital World executives made an appearance, and the investor presentation was led by David Boral, the president of EF Hutton, an investment bank that advised Digital World on the deal, the source said. A Trump Media representative was also in attendance, the source added.

Trump has also been personally involved. He has been calling some investors to ask them to make a commitment to the PIPE of more than $100 million, the second of the sources said.

Investors attending the road show were shown a demo from the planned social media app, called TRUTH Social, which looked like a Twitter feed, the sources said.

Trump has said he is launching his own social media app to stand up against the companies that have barred him from their platforms. He had 89 million followers on Twitter, 33 million on Facebook and 24.5 million on Instagram at the time he was blocked, according to a presentation on his company's website.

Since Trump was voted out of office last year, he has repeatedly dropped hints that he might seek the presidency for a third time in 2024.

Special purpose acquisition companies such as Digital World had lost much of their luster with retail investors before the Trump media deal came along. Many of these investors were left with big losses after the companies that merged with SPACs failed to deliver on their ambitious financial projections.

TRUTH Social is scheduled for a full rollout in the first quarter of 2022, and is the first of three stages in the Trump Media plan, followed by a subscription video-on-demand service called TMTG+ that will feature entertainment, news and podcasts, according to the news release.

In a slide deck on its website, the company envisions eventually competing against Amazon.com's AWS cloud service and Google Cloud.- Reuters 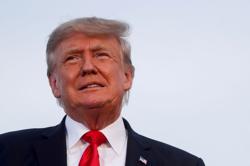