Late in the session, oil prices dropped into negative territory after U.S. officials said the Omicron variant - believed more transmissible than previous strains of coronavirus - had been found in the country.

"When the markets gets hit with news about Frankenstein variants, you're selling and asking questions later," said John Kilduff, partner at Again Capital LLC in New York, said he expects more bullish momentum to return whenever WTI crosses above $70 a barrel.

Benchmark oil futures have been under pressure for weeks on factors ranging from the new coronavirus variant and the U.S. decision to release oil barrels from emergency reserves in tandem with other countries.

Market speculators who had built long positions this year on expectations of tight supply have shifted as fundamentals changed. Still, major brokerages said the selloff has come too far, too fast.

Both Brent and WTI front-month contracts in November posted their steepest monthly falls in percentage terms since March 2020, with Brent down 16% and WTI down 21%.

The new variant has complicated the decision-making process for the Organization of the Petroleum Exporting Countries and their allies, known as OPEC+, who are meeting this week to decide whether to continue adding 400,000 bpd in supply to the markets.

Some had speculated that OPEC+ could pause those additions in an attempt to slow supply growth, now expected to yield a surplus of 3.8 million bpd by March 2022, according to an internal report seen by Reuters. OPEC+ is likely to make its decision on Thursday.

Several OPEC+ ministers have said there is no need to change course. But even if OPEC+ agrees to go ahead with its planned supply increase in January, producers may struggle to add that much.

"There is much to suggest that OPEC+ will not initially step up its oil production any further in an effort to maintain current prices at around $70/bbl," PVM analyst Stephen Brennock said.

The United States, in tandem with several other nations, announced plans in November to release 50 million barrels of its reserves into the market to try to cool energy prices. Retail gasoline prices have barely changed even as unfinished gasoline futures known as RBOB have dropped sharply.

Analysts at Goldman Sachs called the decline in oil prices "excessive," saying "the market has far overshot the likely impact of the latest variant on oil demand." 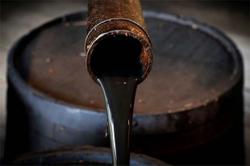