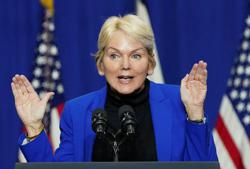 "It's good to know that it's available for these purposes," Granholm (pic) said in a wide ranging interview to be broadcast next week at Reuters Energy Transition North America 2021

"It's good to know that it's available for these purposes," Granholm said in a wide ranging interview to be broadcast next week at Reuters Energy Transition North America 2021 https://reutersevents.com/events/energy-transition-north-america/conference-speakers.php, a Reuters Events virtual conference where leaders will discuss the transition to clean energy.

President Joe Biden announced last week https://www.reuters.com/article/global-oil-reserves-idCAKBN2I804J that the United States would release 50 million barrels of oil from the Strategic Petroleum Reserve (SPR), marking the first time in two decades that a president has used the reserve in an effort to tame oil prices rather than tackle a supply disruption.

Some 32 million barrels of the release will be in the form of a loan that oil companies will repay back to the stockpile, and the remainder will be offered in an acceleration of sales that had already been approved by Congress.

"We have the authority inherent in the statute to be able to do these exchanges, and sales as well, in a thoughtful and methodical way," Granholm said.

The U.S. reserve tap was made for the first time in coordination with smaller releases from other large oil consumers including China, India, Japan and others.

The coordination came after Biden administration officials failed to convince oil producers, including Saudi Arabia and Russia, to produce more oil to meet demand as the world recovers from the pandemic. China has yet to detail its reserve release.

The size of the U.S. release, that came when the oil price was only about $80 a barrel - way off record highs of $147 a barrel touched in 2008 - led some analysts https://www.reuters.com/markets/commodities/biden-white-house-wades-into-oil-market-management-with-stockpile-release-2021-11-24 to say it could hit investments in drilling projects, including in the United States, by sending a signal that $80 a barrel is the upper limit for the market.

Granholm said the United States does not control the price of oil and the administration's long-term goal is to move off oil.

"Ultimately, short-term the solution is to increase that supply, so that it meets demand, and long term to be able to invest in clean energy, so that we are not so reliant on volatile sources," Granholm said.

Amos Hochstein, Biden's energy security envoy, told CNBC on Monday that the administration stands ready to release more barrels from the SPR, particularly as the exchange means most of the release will be replenished.

"Absolutely. This is a tool that was available to us and will be available again," Hochstein told CNBC in Dubai.

Granholm said the SPR is one tool that was used at an "extremely unusual moment" as prices were high when people were beginning to travel more as the coronavirus pandemic waned, but not something that will be used on a daily basis.

"Without making any predictions, one way or the other, I will say that it is a tool that is available," she said about any future releases.- Reuters