Tax revenue from petroleum products to help those in need

KUCHING: The implementation of a sales tax on petroleum products by Sarawak has been one of the ways of “revenue re-engineering” which enabled the state government to generate more income and help those impacted by the Covid-19 pandemic.

Sarawak Deputy Chief Minister Datuk Amar Awang Tengah Ali Hasan said since the sales tax was imposed on petroleum products in 2019, the state has netted an extra RM6.8bil which has been used for the benefit of the people.“This aid has been given to not only the B50 income group but also the M40 group who have been affected by the pandemic.

“The state government has also helped affected enterprises to go online,” he told Bernama in a special interview recently.

Awang Tengah, who is also the state’s Minister of International Trade and Industry, Industry Terminal and Entrepreneur Development, said the tax revenue will also be used for development projects as well as major projects.

“Sarawak Chief Minister Datuk Patinggi Abang Johari Tun Openg has emphasised on the importance of giving help to those affected by the pandemic,” he said, adding that small and medium enterprises (SMEs) in the state have been receiving aid.

He noted that the state government has helped people and businesses in Sarawak through a series of seven aid packages called Bantuan Khas Sarawakku Sayang (BKSS) which involved over RM5.3bil since early 2020.

“Through Budget 2022, the Sarawak Chief Minister has stated that BKSS 8.0 will be launched to help SMEs in the state recover, apart from one-off cash aid to bachelors, newborn babies or mothers who have given birth,” he said.

Awang Tengah said the state government will also channel aid worth RM97mil to the Sarawak disaster committee for the management of Covid-19. — Bernama 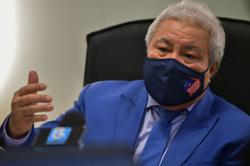