Myanmar, with US$6b in foreign reserves, is doing utmost to stabilise currency 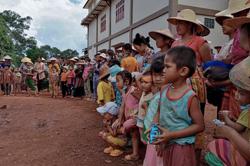 YANGON: Myanmar's military-appointed authorities are doing their utmost to stabilise the kyat currency and support an economy in crisis since a coup in February, a cabinet minister told Reuters on Tuesday, blaming the woe partly on foreign backers of opponents.

Inflation in the southeast Asian nation has soared more than 5% since the military took power and its foreign reserves stand equivalent to 11 trillion kyat, or $6.04 billion at the central bank's official rate, Aung Naing Oo, the junta's investment minister, said in a rare interview.

He attributed Myanmar's economic troubles to sabotage by opponents of the military, a strategy he said was backed by some foreign countries, without identifying them. - Reuters