Going forward, analysts are optimistic that the gradual reopening of the economy is expected to spur vehicle sales for the remainder of 2021.

PETALING JAYA: Non-national vehicle sales are expected to recover faster than national cars with the reopening of the economy, mainly due to the former’s lower reliance on the domestic vendor network.

MIDF Research in a report said it estimates non-national carmakers to have registered a marginal 3% to 4% year-on-year (y-o-y) contraction in September, compared with national brands which are expected to take a hit of around 33% during the same period.

“This is due to the fact that the non-nationals have less reliance on the local vendor network, given the overall lower localisation rate of their models and efficiency in vaccinating vendors.

“Additionally, completely-built-up and completely-knocked-down kits were still being shipped-in throughout the movement control order 3.0, allowing the non-nationals to build up sufficiently high inventory levels to ramp-up production.”

Nevertheless, MIDF Research believes that national cars should be able to catch up post-September, as the vaccination rate of its supply chain gains pace and operating constraints are removed.

“Judging by preliminary sales of national carmakers, which collectively account for more than half of the total industry volume (TIV), we estimate September sales to come in at between 42,000 and 45,000 units.

“This would still represent a 20% to 26% y-o-y contraction, given the slower rate of vaccinations at the vendors but representing continued gains on a sequential basis of between 140% and 157% month-on-month growth.”

Building on this, the research house said it estimates a year-to-date TIV contraction of 7% and 8%, before rebounding from October onwards. “This is relative to our expectation of a 3.7% y-o-y contraction in 2021’s TIV to 510,000 units,” it said.

According to the latest Malaysian Automotive Association (MAA) statistics, TIV plunged to 17,500 units in August, compared with 53,838 units in the previous corresponding period, as operations were disrupted by the nationwide lockdown.

Going forward, analysts are optimistic that the gradual reopening of the economy is expected to spur vehicle sales for the remainder of 2021.

Kenanga Research in a recent report said car companies will also be ramping up promotional campaigns to boost sales.

“With the re-opening of economic activities including sales and production for motor vehicles starting Aug 13, we expect buoyant recovery in car sales, especially with the growing number of back-logged booking for the popular models, as well as the usual year-end promotional campaigns.”

Under the exemption, which was announced by the government in June last year under the short-term economic recovery plan or Penjana, locally-assembled cars are fully exempted from the sales tax, while for imported cars, the sales tax has been reduced from 10% to 5%.

The multiple extensions were mainly due to the repeated lockdowns over the past year-and-a-half, which disrupted business operations and prevented car buyers from being able to fully enjoy the benefits of the tax holiday. 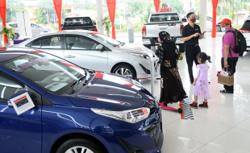