Demand for vehicles expected to rise 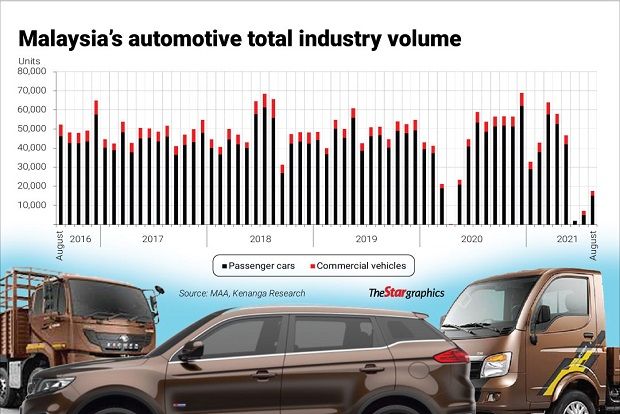 KUALA LUMPUR: The gradual reopening of the economy is expected to spur vehicle sales for the remainder of 2021.

Kenanga Research in a report yesterday said local car companies will also be ramping up promotional campaigns to boost sales.

“With the re-opening of economic activities including sales and production for motor vehicles starting Aug 13, we expect buoyant recovery in car sales especially with the growing number of back-logged booking for the popular models, as well as the usual year-end promotional campaigns.

“Nevertheless, the recovery in car production could be limited by the on-going global constraint in semiconductor chip supply for certain models.”

The research house added that it is keeping its 2021 total industry volume (TIV) target at 460,000 units, tracking behind the Malaysian Automotive Association’s (MAA) 2021 TIV target of 500,000 units.

Kenanga Research said its 2022 TIV growth target will be driven by the expected recovery in the economy post lockdown and herd immunity already being achieved.

The research house added that sales next year will also be spurred by the relaxation of standard operating procedures toward revitalising local travel.

This, Kenanga Research said, should push demand for passenger vehicles, especially the affordable national marques, as the supply of semiconductor chips recover.

“Additionally, a few automakers have assured their commitments to absorb the sales and service tax beyond December 2021,” said the research house.

The Covid-19 pandemic saw a surge in demand for personal electronic items such as cell phones and laptops, which eventually led to a shortage of chips worldwide, as production could not keep up with demand.

Some cars need more than 3,000 chips per vehicle. If one of the chips is unavailable, the production of that vehicle cannot be completed.

Additionally, due to the impact of the pandemic on local car makers, the government announced a vehicle sales tax exemption in June last year under the short-term economic recovery plan or Penjana.

Under the exemption, locally-assembled cars are fully exempted from the sales tax, while for imported cars, the sales tax has been reduced from 10% to 5%.

The multiple extensions were mainly due to the repeated lockdowns over the past year-and-a-half, which disrupted business operations and prevented car buyers from being able to fully enjoy the benefits of the tax holiday.

Due to the multiple disruptions, some industry observers believe that the sales tax exemption might get extended again.

According to the latest MAA statistics, TIV plunged to 17,500 units last month, compared with 53,838 units in the previous corresponding period, as operations were disrupted by the nationwide lockdown.