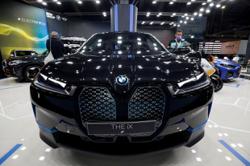 LONDON: Lotus Technology, which develops electric cars for the Lotus brand globally, signed an investment pact with a unit of electric vehicle (EV) upstart Nio Inc, as the iconic British sports and racing-car maker’s Chinese owners seek to transform it into an all-electric brand.

“Lotus Technology and Nio will explore collaboration in areas including high-end intelligent EVs,” Lotus said in a statement.

The company, which broke ground for the global headquarters of Lotus Technology in Wuhan yesterday, plans to roll out three EV models over the next five years, according to the statement.

A separate factory already under construction in the city, with capacity to make 150,000 cars a year, will be completed soon, with production set to start later this year.

The deal with Nio Capital, the investment arm of Nio, was part of a funding round that valued Lotus Technology at 15 billion yuan (US$2.3bil or RM9.6bil), Bloomberg News reported earlier, citing a person familiar with the matter who asked to not to be identified because the matter is private.

Chinese billionaire Li Shufu founded Zhejiang Geely Holding Group Co, which also controls Sweden’s Volvo Cars, and has made a number of strategic moves to add momentum to his carmaking empire as the global auto industry transitions toward electrification and other alternative energies.

The Hangzhou-based carmaker has forged tie-ups with companies including Daimler AG and Renault SA.

Geely purchased a stake in Group Lotus in 2017. It owns 51% of the company, including Lotus Cars and consultancy Lotus Engineering, while Malaysia’s Etika Automotive Bhd owns the rest.

Under Geely, Lotus in 2019 launched its all-electric Evija hypercar, a 1,972-horsepower coupe that costs about US$2mil (RM8.3mil).

Geely is weighing an initial public offering of Lotus Cars, or just its EV unit, as soon as next year, Bloomberg News reported in April. — Bloomberg