PETALING JAYA: The market has priced in much of the impact of weak air passenger volume on airport operator Malaysia Airports Holdings Bhd

(MAHB) for now, with analysts keeping their targets on the company intact.

TA Securities in a report noted that MAHB’s July passenger volume continued to suffer from the full movement control order (MCO), which started in June.

“Although passenger movements staged a rebound of 40.1% on a month-on-month basis in July, the number remained weak with total movements of 262,000.

“Having said that, we do not think this fourth weakest monthly data in 16 months will spring any negative surprise to the market,” it told clients.

For the first seven months of this year, the decline in passenger movements was little changed at 84.4% compared with 84.7% a month ago, it said.

“We still consider this as within our traffic forecasts, considering that fourth quartergrowth could be spurred by the upliftment of interstate travel restrictions,” it added.

“This encouraging performance was supported by both international and domestic segments,” the research house said, adding that the last time ISGIA recorded more than three million movements was in October 2019, indicating that the airport has fully recovered from the pandemic in terms of passenger movements.

In Malaysia, it said continued to believe the interstate travel ban would be removed in the fourth quarter but the international gateway will remain closed for the rest of 2021.

“This is after taking into consideration the progress of Covid-19 vaccination in Malaysia and the top 10 countries of tourist arrivals to Malaysia.”

“As far as reopening of international borders is concerned, we opine that it will remain closed for the second half of 2021 as the vaccination rates of Malaysia’s top 10 most tourist arriving countries are relatively low, except for Singapore and Japan,” said TA.

It is making no change to its traffic forecasts for MAHB and is maintaining its FY21-FY23 earnings projections for the group.

Bernama recently reported that MAHB targets to complete its commercial reset strategy by 2023 instead of 2020 due to the enforcement of movement restrictions.

“The exercise aims to raise the retail profile of airports in Malaysia among travellers and shoppers, making the airport a destination in itself.

“As of July 2021, more than half of the outlets tendered have been awarded, with the total number of outlets tendered so far at 435 out of a total of 814 outlets,” it quoted MAHB senior general manager of commercial services Hani Ezra Hussin as saying. 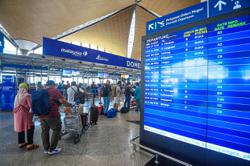