The logo of German sporting goods company Adidas is pictured at one of the company's outlets in Berlin on March 29, 2020. - Photo by Odd ANDERSEN / AFP)

BERLIN: German sportswear company Adidas raised its outlook for full-year sales and profitability as demand soared in most of the world but took a hit in China where Western brands faced a boycott of their products in late March.

Adidas said its confidence was underlined by the planned launch of products such as new versions of its popular NMD sneakers, as well as sports events like the Olympics and the start of the club soccer season in Europe.

Adidas now expects 2021 sales to grow up to 20%, compared to a previous forecast for a "high-teens percentage rate", and for net income from continuing operations to reach 1.4-1.5 billion euros, up from a previous 1.25-1.45 billion.

Currency-neutral sales almost doubled in North America and Europe, Middle East and North Africa in the quarter, but fell 16% in Greater China, in part because the region saw a strong recovery a year ago as it emerged from coronavirus lockdown.

Western brands including Adidas faced online attacks in China in late March over past statements saying they would not source cotton from Xinjiang after reports of human rights abuses against Uyghur Muslims. Beijing denies any such abuses.

Adidas said in May it had initially seen a steep drop in demand in China but sales had since recovered slowly but steadily. It did not comment on the tension on Thursday, beyond referring to the "geo-political situation". - Reuters 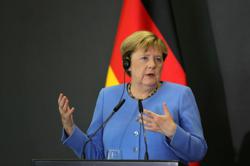