fell in late afternoon trade on Tuesday despite strong record earnings as investors worried about weaker average selling prices in the second half of this year.

When compared with the preceding quarter, its revenue rose 69.1% due to higher sales volume as well as an increase in average selling price (ASP).

But what worried investors were Hartalega CEO Kuan Mun Leong’s comments that the average selling prices of gloves have been declining from their peak moving into the second half of the year. 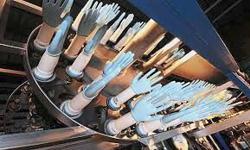