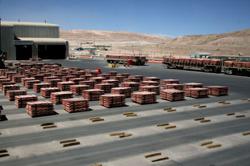 Labour issues: Sheets of copper cathode are pictured at BHP Billiton’s Escondida, the world’s biggest copper mine, in Chile. Workers have decided to strike on wage disputes. ― Reuters

SANTIAGO: Workers at Escondida, the world’s biggest copper mine, voted to strike, rejecting owner BHP Group’s final wage offer in a move that will stoke concerns over global supplies of the metal.

More than 99% of 2,175 members of the main union choose to stop work and pressure BHP into a better contract over the next three years, the union said in a statement.

Labour rules in Chile give management the option to utilise at least five days of government mediation before a strike can begin.

The potential for a disruption at a mine that last year churned out 1.2 million tonnes is rippling through the copper market at a time of strong demand and high prices.

Futures are up about 5% in the past two weeks.

The same union pressing Escondida now for a bigger share of the copper windfall roiled the market in 2017 with a 44-day stoppage.

Chile, which accounts for more than a quarter of global copper supply, is navigating a slew of wage negotiations that threaten supply just as trillions of dollars in government stimulus fuel demand for industrial metals.

Mine workers are emboldened by record producer earnings, with host nations including Chile looking at ratcheting up taxes to help resolve economic inequalities exacerbated by the pandemic.

Mining companies are striving to keep their labour costs in check in a cyclical business and as ore quality deteriorates and prices of inputs start to rise.

Escondida union leaders had urged members to snub the offer delivered at the end of regular wage talks on the grounds it fell short of demands, with the company accused of pushing for longer hours to boost productivity and profit.

While terms of the Escondida offer weren’t released, the union is demanding an additional bonus equivalent to 1% of dividends paid to owners as recognition of sacrifices made by workers, especially in the Covid-19 era.

BHP is a world-leading resources company. It extracts and processes minerals, oil and gas, with more than 80,000 employees and contractors, primarily in Australia and the Americas.

Its products are sold worldwide, with sales and marketing led through Singapore and the United States.

It operates under a dual listed company structure with two parent companies (BHP Group Ltd and BHP Group Plc) operated as if it were a single economic entity, which it refers to as BHP. ― Bloomberg 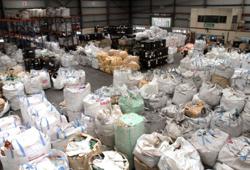