MALAYSIAN corporates, especially those that are exposed directly to the sectors that have been impacted by Covid-19, experienced significant deterioration in their respective balance sheets.

In Malaysia’s case, the two obvious sectors that are directly affected are the aviation industry and the hospitality sector, in particular the travel and tourism-related sub-sector.

In this instance, the notable companies are Genting, Genting Malaysia (GENM), AirAsia

While all the companies reported losses throughout the pandemic period, what is also critical is looking at their net cash or debt level and how that changed over the course of the past fifteen months. (See summary table) From the chart, the first observation is that over the past five quarters, that means for the whole of 2020 and up to the first quarter of this year (Q12021), these four companies alone chalked up total losses of RM11.3bil, led by AAG’s RM5.9bil loss. This was followed by the RM2.75bil loss at GENM, RM1.36bil loss at Genting, and RM1.34bil loss at MAHB.

However, some of these losses were not operational and hence had no impact on the company’s financial cashflows.

For some of these companies, the losses experienced for the cumulative five quarterly periods were also driven by impairments.

In fact, between 22% and 66% of the losses reported were impairments made due to the deterioration in the value of assets held.

This includes impairments that came from receivables, amounts due from associates or related parties, the value of investment in associates, property, plant and equipment, rights of use lease assets, and even casino licences.

The next two columns are related to the net debt levels of the four companies.

The first column refers to the level of net debt as at end of December 2019 and the next column is as at end of Q12021.

From here, the change in each of the four companies’ net debt level over the past fifteen months is calculated, which in total amounted to RM21.82bil. Among the four companies, Genting had the largest change in its net debt, from RM1.85bil to as much as RM15.2bil, a jump of RM13.35bil.

This was followed by GENM and AAG’s RM4.27bil and RM2.85bil deterioration in their respectively net debt levels while MAHB experienced RM1.35bil higher net debt for the fifteen months period.

Accounting losses are not the same as worsening net debt level

One thing for sure from the table is that accounting losses and deterioration in net debt level are two different things as accounting losses include non-cash items like depreciation and amortisation as well as impairment charges.

For example, in Genting’s case, while it reported losses of about RM1.36bil but its net debt level deteriorated by more than eight-fold.

Looking at Genting’s financials, Genting had massive investments that were carried out over the past fifteen months mainly due to the purchase of property, plant, and equipment amounting to RM10.7bil.

Similarly, in GENM’s case, although its net debt level more than doubled over the same period, it was mainly due to the purchase of property, plant, and equipment amounting to RM1.3bil and another RM0.9bil in relation to investment in an associate company. However, in AAG’s case, where fortunes were impacted severely by the pandemic, its financial condition deteriorated mainly due to operational losses.

Very little of the RM2.85bil change in AAG’s net debt was due to the purchase of assets.

The change in AAG’s net debt would have been higher by another RM336.5mil as that was the amount it raised from two private placements that were carried out early this year.

Similarly, for MAHB, much of the change in net debt is related to the operational losses rather than investments, as the airport operator too was affected by reduced air travel.

Preparing for the recovery

Among the four companies, the fortunes of Genting-related companies appear much brighter than AAG and MAHB, mainly due to the diversified nature of Genting’s business, not only in terms of different sectors but also geographically.

In addition, both Genting and GENM have healthy shareholders’ funds and their respective net gearing of 46% and 54.7% appears reasonably acceptable, despite the massive capital expenditure over the past fifteen months.

This is mainly due to the double whammy impact from higher net debt and the drop in shareholders funds by about RM1.47bil or 17.7% over the past fifteen months. For AAG, it had negative shareholders’ funds of RM1.62bil based on its financial statements as at end of Q12021, as against a surplus of almost RM4.5bil as at end 2019, a reversal of more than RM6.11bil. This is after the first two tranches of new AAG shares were issued earlier this year which boosted its shareholders’ funds by RM336.5mil. Hence, AAG needs to address the negative shareholders’ funds in its books urgently. This can only be done via a fresh capital injection and perhaps even a capital reconstruction exercise.

In fact, about three weeks ago, AAG proposed to undertake a seven-year Redeemable Convertible Unsecured Islamic Debt Securities (RCUIDS) right issue exercise on the basis of two RCUIDS with one free warrant for every six AAG shares held. As the RCUIDS are priced at RM0.75 each, AAG is expected to raise some RM1.02bil from the exercise. Effectively, these RCUIDS are hybrid securities as they are both convertible to AAG shares on the basis of one for one, and redeemable from the fourth anniversary onwards, at the rate of 25% of the issue size per annum, if they are not converted to ordinary shares.

Whether RCUIDS holders will convert to ordinary shares or whether warrant holders will exercise their options to convert to new AAG ordinary shares in the future is dependent on AAG’s business operations and fortunes over the next one to two years and whether AAG can return to profitability. Hence, it is rather too early to tell the impact on AAG’s future shareholders’ funds position as to whether it can turn into a surplus due to the conversion of the hybrid papers and warrants that are issued with the subscription.

Clearly, the RCUIDS are insufficient to address AAG’s shortcomings for now. Hence, further capital raising exercise is likely necessary. Even AAG’s plan to issue another 198.2mil shares via a private placement priced at an indicative price of RM0.89 per share will not help as that would only raise some RM176mil.

AAG’s options are not only financial engineering but whether everyone can fly again. 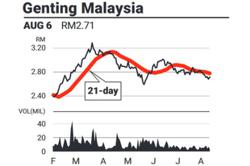