All quiet at a shopping mall on Thursday, July 29, 2021 as non-essential services and businesses close.

KUALA LUMPUR: The Malaysian Institute of Economic Research’s (MIER) consumer sentiments report for the second quarter to June showed signs of consumer fatigue are becoming more apparent and it could worsen.

MIER said not only had consumers’ finances deteriorated further recently, their expectations of their finances and, especially, their assessment of the employment outlook in the next six months are anything but positive.

“Consumers simply do not have the cash to shop, and spending less than before is no longer an option, which means that shoppers, given their tight budgetary constraints, will need to prioritise their buying plans for now,” it said in the report issued late Thursday.

MIER said the survey showed consumer confidence has taken a beating lately amid the Covid-19 pandemic which does not seem to be going away anytime soon.

At a time when businesses are scaling or closing down, manufacturing is weak and foreign currencies are struggling, consumers will be counted on to keep the economy going at a steady, or sustainable, clip.

“But based on the latest findings of consumer sentiments, home sales, and other spending plans, consumers are showing signs of buckling under the task. This is because they need hard cash which they don’t seem to have much of, or any, right now, and this could choke the momentum of consumer spending.

“With jobs looking harder to come by now, the latest dull spending plans clearly reflects households’ sagging finances, suggesting that any slowdown in consumer buying in the third quarter could be even sharper. That means that overall economic growth may not hold up as well,” it said.

The MIER report said like the business community, consumers, too, will exercise more caution with their cash and spending in the days to come or they may just sit out the next quarter or two.

The think-tank said consumers are looking increasingly worried these days, putting less faith on the economy as the Covid-19 pandemic continues to rage on.

At 64.3, the latest reading is the second lowest ever recorded in this series, the highest being 1Q20 when the Covid-19 pandemic first reared its ugly head.

The imposition of the Movement Control Order (MCO) in May 2021 and rising new cases of people contracting the virus in the country have likely dampened consumer spirits lately.

The Star Online reported that as at noon Thursday, Malaysia continued to record high Covid-19 infections. There were 17,170 new cases, raising the total number to 1,078,646 cases.

Selangor continued to record high levels at 7,163 new infections and Kuala Lumpur 2,138. The death toll continued to mount, rising by 174 deaths to 8,725.

MIER said with jobs getting harder to come by lately, more consumers are reporting financial regression as well.

A two-quarter high of 42% of the respondents suffered income losses in 2Q21, up 4 and 3 percentage points from 1Q21 and 2Q20, respectively.

Only 8% reported higher incomes in 2Q21, the second lowest proportion tabulated since 4Q04’s 7%. Respondents this quarter were generally worse off financially than 1Q21 and 2Q20.

MIER said households’ financial outlook is equally lackluster. Overall negative responses have doubled and positive ones have declined by more than half of the previous quarter. While respondents who are hopeful of a financial upgrade soon fell to a five-quarter low of 10% those who feared otherwise rose to a five-quarter high of 32%.

It said unemployment has trended up in 2Q21. By income, only 2% to 7% of the low-, middle- and high-income respondents noted an increase in jobs recently, down from 11% to 18% a quarter ago.

“Those who responded negatively, however, rose to 73% to 87% this quarter from 54% to 56% last quarter. With 87 per cent of those earning low incomes saying jobs have dwindled in 2Q21, this suggests that unemployment has risen in recent months, affecting mainly those in the B40 group,” it said.

Housing, though popularly listed with furniture as the most sought-after items on shoppers’ list this quarter, is losing appeal.

Only 7% of the respondents are planning to go house hunting soon, the lowest proportion obtained since 3Q09.

Among the regions, the north received the highest votes, with 11 per cent of the respondents here saying they will likely shop for a house soon.

“Personal computers, like houses, have also been listed by 7% of the respondents as items to be bought in the next few months.

“Much of its demand is attributable to the current pandemic which has increased the use of computers in all aspects of life since its outbreak in 1Q20. Potential buyers of this item are expected to be mainly from the high-income group, rural areas, as well as the northern and central regions,” it said.

The popularity of cars is also sagging. With only 5% this time expressing interest in this item, this proportion represents the lowest proportion received since 3Q04.

Raking in the second highest proportion of favourable responses is furniture. Only 6% of the respondents are setting their sights on this item this time, the lowest in five quarters.

Of those planning to buy this item soon, most are from the high-income group and northern region.

The demand for television, washing machine, refrigerator and cooker is also abating, with smaller proportions conceding such intentions being collected this quarter. 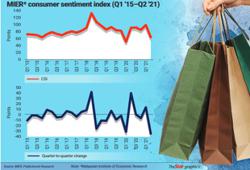