Silicon wafers are the fundamental building material for semiconductors, which, in turn, are vital components of virtually all electronics goods.

KUALA LUMPUR: Global silicon wafer area shipments rose 6% to 3,534 million square inches in the second quarter to June which was a fresh record after the historic high in the first quarter.

The Semiconductor Equipment Manufacturers Industry (SEMI) Silicon Manufacturers Group (SMG) reported on Wednesday the 2Q shipments were higher by 12% from 3,152 million square inches a year ago.

Silicon wafer shipments in the second quarter to June 2021.

“The supply of silicon for both 300mm and 200mm applications is tightening as demand continues to outstrip supply.”

Silicon wafers are the fundamental building material for the majority of semiconductors, which are vital components of all electronics including computers, telecommunications products, and consumer devices.

The highly engineered thin disks are produced in diameters of up to 12 inches and serve as the substrate material on which most semiconductor devices, or chips, are fabricated. 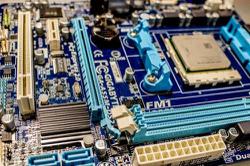