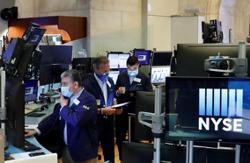 NEW YORK: Expectations that the US economic rebound will slow in the second half are weighing on small-cap stocks, forcing fund managers to look for companies that could continue to profit in a lower growth environment.

The Russell 2000 index, which tracks smaller companies, has underperformed the S&P 500 in each of the last four months.

Small-caps stocks have been among the beneficiaries of the so-called reflation trade, which also saw investors bet on shares of banks, energy firms and other economically sensitive companies and lighten up positions in US Treasuries on expectations of a powerful economic rebound.

Some now believe that bounce has run its course and the economy will slow in the coming months, sparking a rotation back into the technology and high-growth stocks that have led markets higher over the last decade.

Yields on the benchmark 10-year Treasury, which move inversely to prices, edged higher on Friday but remained near their lowest levels since February.

In testimony before Congress earlier last week, Federal Reserve chairman Jerome Powell said rising inflation is likely to be transitory and that the US central bank would continue to support the economy, adding to pressure on yields.

His firm has been paring its overweight on small caps and is now neutral on the asset class due to expectations that the economic boom from the coronavirus recovery will be short-lived.

Overall, fund managers have unwound their bullish bets on small caps relative to large caps back to levels last seen in October 2020, before the announcement of effective coronavirus vaccines helped fuel an outsized rally in cyclical and small-cap stocks, according to a global survey of fund managers by Bank of America Research.

Low bond yields will likely continue to weigh on small caps as investors opt for sources of income such as dividend stocks rather than look for capital gains, said Lamar Villere, a portfolio manager at Villere & Co.

“People are trying to chase any yield that they can and that comes at the expense of small caps.

“You’ve got this huge demand on the client side for blue-chip dividend-paying stocks right now because it’s the only place you can get any sort of yield,” he said.

His firm has not added any new positions in small caps over the last six months, he said, and has instead added companies such as media giant Viacom Inc to its portfolios.

Investors will get additional clues as to how broadly the US economy is expanding in the week ahead through data showing new housing starts tomorrow and an index of leading economic indicators on Thursday.

Netflix and Twitter, meanwhile, are also expected to release their latest quarterly earnings results in the week ahead, giving investors a deeper read into how the reopening of the economy has affected revenue growth. — Reuters