PETALING JAYA: The recently extended vehicle sales tax holiday is a timely move, as it will help boost sales and absorb the impact of the multiple lockdowns imposed this year.

“The ongoing pandemic has created plenty of uncertainty and many customers, in the spirit of wanting to remain cautious, will downgrade to cheaper, more fuel-efficient vehicles.

“We believe the tax exemption will bolster interests in passenger vehicles, especially Proton and Perodua.”

“Various bodies, including the Malaysian Automotive Association (MAA), have been a strong advocate for this extension.

“This leeway helps to absorb much of the sales and production disruptions (especially in June 2021, which would likely mirror the poor performance in April 2020), due to the multiple lockdowns/movement control orders (MCOs) and global chips shortage during this period, ” it said in a report.

“We expect stronger May 2021 figures but June will be much weaker due to the lockdown.

“Otherwise, we still await the government to roll out the much anticipated but delayed electric vehicle policy, which is expected to be announced in June or July this year.”

The vehicle sales tax exemption was announced in June 2020 under the short-term economic recovery plan (Penjana) and was supposed to last until the end of last year.

Under the initiative, locally-assembled cars are fully-exempted from sales tax while for imported cars, the sales tax has been reduced from 10% to 5%. MIDF Research also said the tax holiday extension is a welcomed move, given the constraints faced by automotive players during the first half of this year.

“The tax holiday period during the first half of 2021 was affected by production constraints, while June deliveries would have been impacted given the full lockdown implementation from June 1,2021, whereby auto vehicle and component manufacturing facilities are only allowed to operate at 10% workforce capacity.

“As players still have up to four months of order backlog to deliver, the tax holiday extension serves both to provide the needed room to accommodate these deliveries and to boost bookings further post-lockdown period.”

On the outlook for the remainder of the third quarter, or the final quarter of this year, an industry observer said much will depend on how soon the Covid-19 situation in the country can be brought under control.

“The sooner the number of daily infections can be brought down to levels where the lockdown can be lifted, things will definitely pick up not just for the economy but also for the local automotive sector.

“The performance of the local automotive industry is directly linked to the state of the economy.”

He added that the nationwide vaccination rollout programme is key to bringing the number of Covid-19 cases down.

“The sooner it can be done, the better. This is important in improving buyer sentiment. The current uncertainty in the market is causing many potential buyers to hold back purchases and adopt a wait-and-see attitude, ” he said.

Meanwhile, Kenanga Research in a recent report said it expects the current hiccup in sales of the older models from the global chip shortage to be offset by sufficient supply for the newer models, which garner better margins.

“We believe the new volume-driven launches (such as the Perodua Ativa(pic below), Proton X50, Honda City and Nissan Almera) could help spur sales along with overflowing backlogged bookings and further boosted by the extension of the sales tax holiday, seasonal promotions and more new launches expected in the second half of the year. 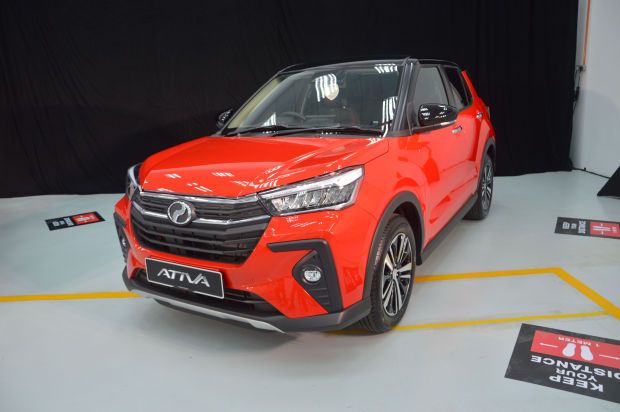 “Overall, 2021 could potentially be a better year with the National Automotive Policy 2020 incentive programme, positive impact from Bank Negara’s interest rate cut and preemptive measures that soften the Covid-19 impact.”

PublicInvest Research also believes that the extension of the tax holiday will mitigate the impact of the MCO.

“In a surprise announcement, the government announced there will be a (two-weeks) phase one total lockdown for all economic and social sector activities except for essential economic and service sectors, followed by a second phase that extends for another four weeks, which will see a gradual re-opening of some sectors.”

As a result, the research house noted that all showrooms, vehicle productions and deliveries are to be temporarily closed during phase one, except service centres where everything will be by appointment only.

“Thus we expect close to zero sales for June 2021 if phase one were to last for a month.

“Nevertheless, the impact of the lockdown is likely to be mitigated by the government’s extension of the current sales tax exemption to Dec 31,2021, which could lead to stronger vehicle sales volume in the second half of 2021, ” it said.

According to data by the Malaysian Automotive Association (MAA), total vehicle sales in Malaysia surged to 57,912 units in April this year, as sales in the previous corresponding period were drastically affected by the implementation of the MCO.

For this year, MAA projects TIV to grow 8% to 570,000, on the back of the renewed sales tax exemption and stronger economic recovery.

The MAA is scheduled to have its second bi-annual meeting next month, where it will announce whether it will be maintaining or revising its 2021 vehicle sales forecast. 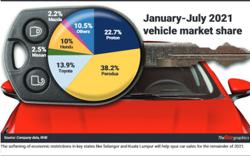