Axiata has teamed up with RHB Bank to apply for a digital bank licence, based on a news report.

Vitrox said its unit is buying land worth RM48.33mil in Penang to execute its 10-year expansion master plan, which will be fully completed by 2030.

The Securities Commission said it has begun an investigation into Serba Dinamik after the company's auditors flagged issues last week.

On Friday, the group said KPMG had raised issues over more than RM3.5bil billion of contracts and transactions that the auditor had not been able to verify with 11 customers.

“Following yesterday's decline, the FBM KLCI could consolidate above the support of 1,550 points and continue to trend sideways,” JF Apex said. 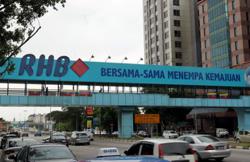