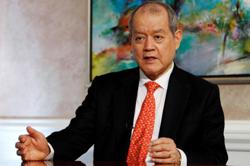 SINGAPORE: Singapore’s High Court approved a request to freeze as much as US$3.5bil (RM14.49bil) of assets worldwide belonging to the founding family of collapsed oil trader Hin Leong Trading (Pte) Ltd in a move that may be one of the biggest such injunctions in the city-state’s history.

Lim Oon Kuin and his family will be asked by lawyers representing liquidator Goh Thien Phong to disclose their assets to the court in the next few days, according to an e-mail seen by Bloomberg News that was sent to creditors on Friday to inform them of the judgment. The Lims may file an appeal against the asset-freeze order, Goh told creditors.

The asset-freeze order is a step toward debt recovery for bank creditors including HSBC Holdings Plc and DBS Group Holdings Ltd, which together are owed about US$3.5bil (RM14.49bil) by Hin Leong. The Lims have sold assets worth millions of dollars in recent months, including a 41% stake in a Singapore commercial storage facility to state-backed operator Jurong Port Pte Ltd in March. The Lims have also divested dozens of ships owned by the family’s Xihe Group, according to VesselsValue, which tracks such sales.

Hin Leong, once the city-state’s largest independent oil trader, had applied through its then-judicial managers to freeze assets, shares and funds held by its founder, known as OK Lim, and his two children. The request was motivated by a risk of asset dissipation as more than 20 banks fought to recover billions of dollars in loans to the fabled trader.

The asset-freeze order also specifies the Lim family’s weekly living expenses, according to two people with knowledge of the matter. The decision took effect from May 21, and applies to Lim and his two children Evan Lim and Lim Huey Ching, who were both directors of Hin Leong.

The court approved the winding up of the company in March after a sale process by the court-appointed managers failed to attract bids. Lim, 79, has been charged with forgery and related offenses. He had denied allegations made by HSBC that he used forged documents to obtain financing.

The fallout reverberated across global markets, prompting financial institutions to reassess their exposure and shaking out large tracts of the often-opaque US$4 trillion (RM16.56 trillion) oil-trading industry.

The family’s assets include properties in Singapore and Australia, cash and investments, insurance policies, shares and club memberships, according to a court filing.

OK Lim and his children are allowed to remove any of their assets from Singapore, or dispose or reach deals with their possessions so long as the total unencumbered value of their holdings still in Singapore remains no less than US$3.5 billion (RM14.49bil), according to the filing. — Bloomberg