KUALA LUMPUR: The crude palm oil (CPO) futures contract on Bursa Malaysia Derivatives is expected to trade lower next week amid a slowdown in demand post-Eid al-Fitr festive season with price hovering between RM3,800 and RM3,900 per tonne.

Interband Group of Companies senior palm oil trader Jim Teh said the demand for CPO would likely be lower especially from traditional markets like India, Pakistan and the Middle East.

He also foresaw a further reduction in the price of the vegetable oil in the second half of 2021 but stressed that the commodity had already recorded the highest prices in the industry’s history this year.

This versatile oil reached RM4,773.50 per tonne on May 18, hitting a record price for the 11th time this year.

"The CPO prices are beautiful now and this is good news for the smallholders. However, consumers are making noise over the increase in cooking oil prices,” he told Bernama.

Meanwhile, palm oil trader David Ng reckoned the tighter restrictions by the government might curb movement in terms of planting activities, which in turn would affect output.

On Friday, the government agreed to tighten the implementation of the third round of Movement Control Order (MCO 3.0) with additional economic and social restrictions.

Compared to Teh, Ng was slightly more bullish in his CPO price outlook, projecting the commodity to trade between RM3,900 and RM4,100 per tonne in the short term.

However, he also expected CPO prices to fall further and boost bargain hunting next week.

Singapore-based Palm Oil Analytics’ owner and co-founder Dr Sathia Varqa said the market sentiment was expected to be bearish next week but the lower output data might cushion the fall in CPO prices.

"India may reduce its export tax because of its high local (edible oil) prices. This means Bursa Malaysia Derivatives palm oil will shoot up. Indonesia will also be making a decision on the June export tax which is expected to be higher,” he said.

Malaysia, on the other hand, has maintained the export tax for CPO for June 2021 at eight per cent -- the sixth straight month at the same level.

On export data for the May 1-20 period this year, cargo surveyors estimated a rise in the number.

For the week just ended, Malaysia’s CPO futures market was traded lower in line with weakness in soybean oil performance on the US Chicago Board of Trade, as well as concerns over export demand to India and profit-taking activities.

Weekly volume strengthened to 368,985 lots from 156,560 lots in the previous holiday-shortened trading week, while open interest climbed to 263,477 contracts from 228,824 contracts a week earlier.

The physical CPO price for May South slipped RM370 to RM4,450 per tonne. - Bernama 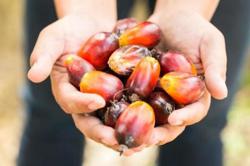