Virtual currencies should not and cannot be used in the market because they’re not real currencies, according to a notice posted on the PBoC’s official WeChat account. Financial and payments institutions are not allowed to price products or services with virtual currency, the notice said.(File pic shows Bitcoins)

NEW YORK: Bitcoin and other major cryptocurrencies slumped after the People’s Bank of China (PBoC) conveyed a statement reiterating that digital tokens can’t be used as a form of payment.

The largest token fell below US$40,000 (RM165,519) for the first time since early February, dropping as much as 10% to US$38,973 (RM161,270) yesterday and continuing a weeklong slide sparked by Elon Musk’s back-and-forth comments on Tesla Inc’s holdings of the coin. Ether, Dogecoin and last week’s sensation, Internet Computer, also retreated.

“This is the latest chapter of China tightening the noose around crypto, ” said Antoni Trenchev, managing partner and co-founder of Nexo in London, a crypto lender.

Virtual currencies should not and cannot be used in the market because they’re not real currencies, according to a notice posted on the PBoC’s official WeChat account. Financial and payments institutions are not allowed to price products or services with virtual currency, the notice said. The statement doesn’t have any new regulatory steps, according to Yu Lingqu, a vice-director at the China Development Institute think-tank in Shenzhen. The notice was conveyed by the central bank but compiled by industry associations rather than government officials, making it less powerful, according to Liu Yang, a lawyer at Beijing-based law firm DeHeng Law Offices.

Beijing since 2017 has abolished initial coin offerings and clamped down on virtual currency trading within its borders, forcing many exchanges overseas. The country was once home to about 90% of trades but the lion’s share of mining and major players have since fled abroad.

China has recently taken steps to issue its own digital yuan, seeking to replace cash and maintain control over a payments landscape that has become increasingly dominated by technology companies not regulated like banks.

For Stephane Ouellette, chief executive and co-founder of FRNT Financial, the moves have more to do with Musk’s recent tweets about bitcoin. “Tesla’s entrance into the space saw some of the most aggressive bitcoin buying I’ve personally ever seen – and it has to unwind, ” Ouellette said.

The electric vehicle-maker’s retraction that it will accept bitcoin as payment “was the catalyst that accelerated the spread consolidation. Then over the weekend, little comments here and there have continued to confuse, ” he said. ─ Bloomberg 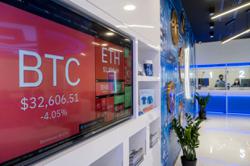