handled a container throughput of 10.5 million twenty-foot equivalent units (TEUs), the second highest ever in its history and was only three per cent less than the previous year’s record volume for the financial year ended Dec 31, 2020 (FY20).

This was despite the worst pandemic in a century and its pervasive subsequent global adverse effects.

In a filing with Bursa Malaysia today, after its annual general meeting via remote participation and electronic voting, the company said Westports was the first and still is the only port in Malaysia that handles more than 10 million TEUs of container throughput in a year.

For FY20 the company declared total dividend of 11.52 sen and distributed RM393 million after adopting a prudent approach of temporarily trimming the payout ratio to 60 per cent to conserve cash.

"The company will revert to a payout ratio of 75 per cent in the coming financial year. Since Westports’ initial public offering in 2013, the company has distributed a total dividend of RM3.14 billion to shareholders,” it said.

Group managing director Datuk Ruben Emir Gnanalingam Abdullah is of the view that economic growth should recover in 2021 after a pandemic ravaged year and expected a single-digit container throughput growth level.

"Peering into the longer term, the slight congestion experienced by Westports at the end of 2020 and constraints experienced by many ports abroad reaffirmed our vision of the need to undertake the proposed mega container terminal expansion that we have been planning for in recent years.

"Westports’ new expanded facility would double the total container terminal (CT) handling capacity and enhance total yard space significantly. The eventual expansion to CT17 will anchor Westports and Port Klang as one of the pre-eminent transhipment hubs in Southeast Asia,” he added. 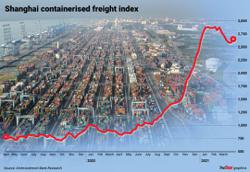