The Centers for Disease Control and Prevention (CDC) and Food and Drug Administration said the risks of experiencing the syndrome involving severe blood clots and low platelets as a result of the vaccine was very low. They found 15 cases in the 8 million shots given.

"We are no longer recommending a pause in the use of this vaccine," CDC Director Rochelle Walensky told a news briefing. "Based on the in-depth analysis, there is likely an association but the risk is very low."

Top U.S. FDA officials said the decision was effective immediately, clearing the way for shots in arms as early as Saturday. The agency said it would warn of the risk in an updated fact sheet given to vaccine recipients and providers.

The agencies made the decision following a meeting of outside advisers to the CDC who recommended that the vaccine pause be ended.

In an analysis presented at the meeting, CDC staff said that the cases of the syndrome that they had found occurred at a rate of seven per one million doses in women under age 50, with the highest risk occurring among women ages 30 to 39.

For women over age 50 and for all men, the clots appeared at a rate of one per one million doses, the analysis showed. In all, there were three deaths, officials said.

After a day-long meeting, the CDC panel voted 10-4 that the J&J vaccine be used as recommended in people 18 years of age and older, the parameters of its current FDA authorization.

Dr. Jesse Goodman, an infectious disease expert at Georgetown University in Washington and a former chief scientist at the FDA, said the risk was not trivial, but still small.

Unlike the highly effective vaccines by Pfizer Inc and Moderna Inc, which require two doses and must be kept frozen at ultra-cold temperatures, J&J's vaccine can be given in a single dose and stored at regular refrigeration temperatures, making it a better option for hard-to-reach areas.

"We will collaborate with health authorities around the world to educate healthcare professionals and the public to ensure this very rare event can be identified early and treated effectively," J&J's Chief Scientific Officer Paul Stoffels said in a statement after the agencies made their announcement.

When the agencies first announced the pause, they urged doctors to avoid using the blood thinner heparin, commonly given to patients to break up blood clots, in people who had received the J&J vaccine and were experiencing blood clots and low blood platelets.

In the cases of the vaccine-induced blood clots, however, heparin appears to make the condition worse. Walensky said doctors heeded that warning, noting that the drug had not been used in any of the cases identified after the pause began.

The U.S. decision follows a similar one by the European Medicines Agency, which on Tuesday said the benefits of the J&J shot outweighed its risks and recommended adding a warning about unusual blood clots with low blood platelet counts to the vaccine's product label. J&J resumed its rollout there.

The J&J probe followed an investigation in Europe of the AstraZeneca PLC vaccine, with which similar cases of blood clots were first identified. Dr. Peter Marks of the FDA said the cases appear so similar that a doctor would not be able to tell which vaccine caused them.

Both the J&J and AstraZeneca vaccine use different versions of a cold virus to deliver instructions for making coronavirus proteins into cells to produce an immune response. Marks said studies are underway to determine whether the adenovirus or something else is behind the rare blood clots.

"Giving people the choice to receive a single-dose vaccine will help get more people vaccinated faster and will better protect some populations, such as those who are homeless or incarcerated," Moss said by email.

J&J has faced several setbacks since its vaccine gained U.S. emergency authorization in February, including drawing scrutiny over production shortfalls.

In the United States, 35% of adults are fully vaccinated and 53% have received at least one shot, according to CDC data. The United States leads the world with roughly 570,000 COVID-19 deaths.

Use of Johnson & Johnson's COVID-19 vaccine should resume in the United States, advisers to U.S. health regulators said on Friday, after reviewing data showing it will help save lives and prevent hospitalizations despite the risk of extremely rare but potentially deadly blood clots.

The recommendation paves the way for J&J's one-dose shot to begin going into arms again in the United States, once they are confirmed by regulators.

The U.S. Centers for Disease Control and Prevention (CDC) and the U.S. Food and Drug Administration paused its use last week in order to review reports of the dangerous blood clot condition accompanied by low blood platelets.

If vaccinations with J&J’s shot resumed, it could prevent up to 1,400 deaths from COVID-19 and up to 3,500 admissions to intensive care units over six-months depending on how many doses are used, CDC official Sara Oliver told the panel. There could be at least 26 cases of the clotting condition during that period as well out of nearly 10 million shots administered, she said.

The CDC also said not resuming the shot would delay the U.S. from reaching its immunization goal by 14 days.

CDC Director Rochelle Walensky, who can accept or reject the panel's recommendation, said earlier on Friday she hoped for a quick resumption of the shot.

The panel voted 10-4 to reaffirm that the J&J COVID-19 vaccine is recommended for use in people 18 years of age and older.

"The benefits do clearly outweigh the risk from a population and individual perspective," said Dr. Beth Bell, a member of the advisory panel and a clinical professor at the University of Washington in Seattle.

Panelists who voted against raised concerns that women might not be fully informed of the risks or be told that they could choose an alternate vaccine.

"The Committee’s recommendation is an essential step toward continuing urgently needed vaccinations in a safe way for millions of people in the U.S.," said J&J's Chief Scientific Officer Paul Stoffels in a statement.

The FDA will update the emergency use authorization for the vaccine to include information about the risk and how to recognize and treat the condition, J&J executives told the panel.

Dr. William Moss, executive director, International Vaccine Access Center at the Johns Hopkins Bloomberg School of Public Health said the vaccine should be used with warnings of the risk as it will help advance the vaccination effort.

“Giving people the choice to receive a single-dose vaccine will help get more people vaccinated faster and will better protect some populations, such as those who are homeless or incarcerated," he said via email.

The American Medical Association applauded the decision, saying the data presented at the meeting "clearly demonstrates that the benefits of this approach outweigh the risks, which include becoming infected with COVID-19 and the potential for severe illness or death."

The European Medicines Agency on Tuesday said the benefits of the shot outweighed its risks and recommended adding a warning about unusual blood clots with low blood platelet counts to the vaccine's product label. J&J resumed its rollout there.

The regulator said the blood clots in patients who received the J&J vaccine bear close resemblance to 169 cases in Europe reported with the AstraZeneca Plc vaccine.

J&J has faced several setbacks since its shot gained U.S. emergency authorization in February, including drawing scrutiny over production shortfalls. FDA inspectors this week cited a long list of serious cleanliness and safety issues at an Emergent BioSolutions plant making the J&J vaccine. 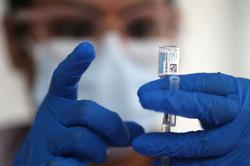