KUALA LUMPUR: RAM Ratings has raised its full-year inflation projection for 2021 to 3% from 2.3% previously due to higher Brent crude prices.

The ratings agency said in statement it had raised its price estimate on Brent crude to US$60 a barrel from US$45-50 a barrel this year.

"Oil prices have been stronger than expected this year, driven by positive sentiment, controlled output by OPEC+ and winter storm disruptions in the US.

"While prices are envisaged to moderate in 2H 2021 as production gradually increases, they should still be supported by stronger demand relative to 2020," it said.

The average price of RON95, which is a key driver to transport fuel inflation, climbed 17.6% year-on-year to RM2.05 a litre in March, following a 5.7% y-o-y contraction in February.

According to RAM, March's headline inflation is estimated to have accelerated to 1.7% from 0.1% in February.

"Brent crude prices remain a key driver of our inflation forecast for 2021.

"Every USD5 movement in the average price of Brent crude is estimated to alter Malaysia’s 2021 headline inflation by about 0.4 percentage points, barring any second-round effects on prices," it added.

However, the inflationary impact of further price increases beyond USD60/barrel is capped by the fuel price ceiling currently in place.

Meanwhile, inflation for all the other sub-components is expected to remain subdued this year due to still sluggish demand and negative output gap. 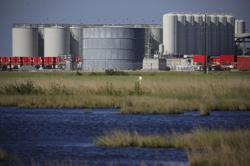