Mr DIY, which opened its 700th store last month, has gained over RM14bil in market capitalisation since its first day of trading in Oct 2020.

PETALING JAYA: It has only been six months since MR DIY Group (M) Bhd

was first listed on the bourse, but its outlook has turned more promising as consumer spending recovers amid a more relaxed movement restriction.

The optimism on the home improvement retailer’s prospects is also underpinned by its strong sales growth and double-digit profit margin.

An analyst said the actively-expanding Mr DIY could potentially enter the exclusive FBM KLCI league, placing it among the 30 largest stocks on Bursa Malaysia in terms of market capitalisation.

Mr DIY, which opened its 700th store last month, has gained over RM14bil in market capitalisation since its first day of trading in Oct 2020.

At RM25.36bil market cap as of April 15, Mr DIY is already larger than Supermax Corp Bhd

AmInvestment Bank Research said in a note that Mr DIY deserves a higher valuation compared to its regional peers, considering that there is a “high possibility” for the company to be included in the FBM KLCI, as well as its recovery prospects as pandemic restrictions begin to wane.

“Additionally, Mr DIY has the scarcity premium of being the sole large market cap player in the affordable home improvement retailer category.

“Our price-to-earnings of 38 times (previously 36 times) is at a 30% premium to its regional peers’ average of 29 times, ” it said yesterday.

The research house is bullish on Mr DIY’s future earnings outlook, underpinned its unrivalled gross profit margins of about 43%, expansion into less urban areas, quick store breakeven periods of less than two years and expected success of its multi-store format.

In addition, a recovery in pandemic restrictions will improve footfall for Mr DIY’s stores and the transaction volume of high-margin stationery and sports equipment items.

AmInvestment Bank Research has maintained its “buy” call on Mr DIY, with a higher fair value of RM4.48 per share as compared to RM3.80 per share previously.

Looking ahead, Mr DIY is expected to see a stronger contribution from its high-margin stationery and sports segment, following the gradual relaxation of movement restrictions and the reopening of schools.

On costs of goods, AmInvestment Bank Research does not expect a major fluctuation as the home improvement retailer has made attempts to reduce currency risk against China’s yuan.

“Going forward, we do not expect any significant change to this value, as attempts at alternative sourcing may not be competitive.

“Thus, no major shake-up in expenses expected, ” it said.

Meanwhile, the research house believes that the contribution from e-commerce channels will remain immaterial for Mr DIY.

Aside from sudden spikes during periods of movement lockdown, the average monthly sales from e-commerce channels remains less than RM1mil.

“Mr DIY believes this is because the products are cheaply priced and abundantly found.

“As a result, customers prefer to pay and handle the products in person rather than ordering online, ” it said. 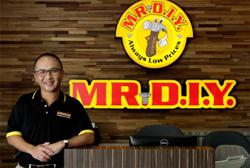