MSM has temporarily shut down its refinery at the Tanjung Langsat Industrial Complex in Pasir Gudang. It explained that the temporary production shutdown is to allow for the plant’s boiler rectification after a breakdown.

Top Glove, which has been prohibited from exporting its goods from Malaysia to the US following allegations of forced labour, said that its gloves produced from factories outside Malaysia can still be shipped to the US.

MMC has benefitted from higher demand for cargo storage space at its Port of Tanjung Pelepas in Johor, which is operated by its unit Pelabuhan Tanjung Pelepas Sdn Bhd, due to the recent blockage at the Suez Canal caused by a trapped container ship.

Axiata confirmed that it will be merging with Digi to form Celcom Digi Bhd. The merger only involves the Malaysian operations of both companies.

BS Bina has signed an agreement with the Melaka government to reclaim and develop land spanning 1,200 acres in Tanjung Bruas.

Meanwhile, the US market advanced overnight with the S&P extending its record high after the Federal Reserve chairman indicated more robust economic recovery is needed.

Earlier, European stocks climbed after the Fed's minutes of meeting was released.

“Following the recent sideways trend, the FBM KLCI could continue to remain flat above the support of 1,560 points,” JF Apex said. 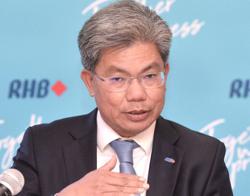