shot up on news that the telcos are in advanced discussion about a merger.

Axiata said it has plans with Digi's parent, Telenor Asia, to merge the operations of the two telco firms and are aiming to finalise agreements over the proposed transaction within the second quarter of this year following due diligence.

In the event of a successful merger, the parties will each have equal ownership of about 33.1% stake.

The joint shareholding of Axiata with Malaysian institutional funds will be over 51% of the merged company, thereby safeguarding the national interest, it added.

Among the terms of the transaction, Axiata will receive newly issued shares in Digi representing 33.1% post-transaction shareholding and cash equalisation of about RM2bil, of which RM1.7bil will come from Digi as new debt and the balance of RM300mil from Telenor.

"MergeCo will be considered a leading telecommunications service provider in Malaysia in terms of value, revenue and profit, with proforma revenue of about RM12.4 billion, pre-synergy Ebitda of the combined entity at approximately RM5.7bil, and an estimated 19 million customers," said Axiata.

TA Securities said the proposed merger of Celcom and Digi to be positive for the telecommunications industry as consolidation should ease competitive pressures within Malaysia’s mature mobile market.

"Between Axiata and Digi, we identify shareholders of Digi to be clearer beneficiaries of the proposed merger as the value accretion from synergies would be more direct.

"That said, for shareholders of Axiata, apart from the potential for value accretion and dividend upside via MergedCo, we view that they would also stand to benefit from the establishment of market valuation for its Malaysian operations via the MergedCo," it said.

Kenanga Research maintains “neutral” on the sector and is positive with the news.

“We are positive but were not surprised with the proposed merger between Celcom and Digi which keeps national interests intact with over 51% local ownership.

and not from forced layoffs and believe this deal is more likely to go through versus a failed attempt in 2019,” it said.

“Overall, maintain neutral pending a deal completion and given that information at the moment is too sparse for us to pencil in a realistic scenario,” Kenanga said. 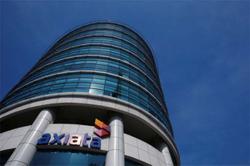