CGS-CIMB Research expected the opening of 40 to 100 new CU outlets per year over financial years 2021 ending Oct 31 (FY21) to FY23 forecast, noting that the capacity take-up will be gradual. “Thus, we are still expecting its FPC to remain loss-making till end-FY22 forecast, ” it added

PETALING JAYA: Although the opening of CU outlets by MyNews Holdings Bhd

CGS-CIMB Research expected the opening of 40 to 100 new CU outlets per year over financial years 2021 ending Oct 31 (FY21) to FY23 forecast, noting that the capacity take-up will be gradual.

“Thus, we are still expecting its FPC to remain loss-making till end-FY22 forecast, ” it added.

Meanwhile, CGS-CIMB Research estimated the average revenue per store to be around 50% higher for CU outlets compared with existing MyNews outlets.

However, the research house expected average revenue per store for MyNews outlets to recover to pre-Covid 19 levels by FY22 forecast.

“We are only penciling in muted growth from there as the addition of CU outlets could cannibalise sales from existing MyNews outlets, ” it noted.

Currently, its FPC is mostly catering to its existing MyNews outlets, of around 60% that carries ready-to-eat (RTE) products under the group’s Maru in-house brand.

However, CGS-CIMB Research noted the RTE food items utilisation ramp-up would depend on the rate of CU store openings.

The preparation of most of its RTE products is done in the group’s existing FPC while its counter food products are prepared in-store.

After attending the soft launch of the first CU outlet, CGS-CIMB Research reckoned the payback period for its intial stores could be shorter than the group’s targeted two to three years.

“This is judging by the strong response for its first store as seen from long lines throughout operating hours.

“The CU store offerings of South Korean-style fried chicken, tteokbokki, odeng and cheezy corn sausage as well as sweet products, such as bingsu, differentiate it from other convenience stores in Malaysia, in our view, ” the research house said in a report.

As such, the research house has raised MyNews earnings per share forecasts by 0.8% to 39.3% mainly attributed for increased contribution and profitability for its CU outlets.

It is keeping a “hold” call on MyNews with a higher target price of RM1 given the earnings upgrade, based on price-to-earnings ratio of 24 times for calendar year 2022, in line with regional convenience store peers. 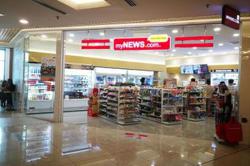