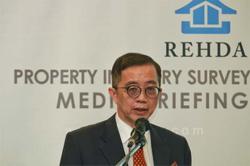 PETALING JAYA: Local developers are more optimistic about the outlook of the property market in the second half (H2) of 2021 than the first six months of the year, on the expectation that an impending economic recovery will spur buying sentiment.

In a survey of 134 respondents by the Real Estate and Housing Developers’ Association (Rehda), it was revealed that 20% are optimistic about the property market and sales performance in H2 of 2021, compared with just 8% in H1 of 2021.

The survey also showed that 26% are optimistic about residential sales growth in H2, compared with just 8% in H1.

“With more countries recovering from Covid, our trade will improve and this will boost our economy.

“When the broader economy recovers, the property market will as well, ” he said during a media briefing yesterday.

“We hope that the HOC, which tentatively ends on May 31, will be extended until the end of the year.

Amongst respondents with future launches, the majority of them (83%) anticipate their sales performance to be 50% and below for the first six months of this year.

The survey revealed that Kedah, Perlis, Negri Sembilan, Pahang and Selangor planned to launch residential units within the RM250,001 to RM500,000 price range, whereas Johor, Penang and Wilayah Persekutuan aimed to offer units priced between RM500,001 and RM700,000.

Additionally, Rehda said respondents were neutral about the economic and business outlook, as they were concerned about consumers’ purchasing power in H1 of 2021.

The same was reported with the property industry outlook, specifically with regards to residential sector growth.

However in both cases, Rehda said there is increased optimism for H2 of 2021.

Out of the 5,736 residential units sold, 2,467 units were in the two-and-three-storey terrace category, while the second top performing type was service apartments with 1,225 units while 1,082 units of apartments/condominiums were sold in H2 of 2020.

Rehda said first-time buyers made up the majority of purchasers in the period under review, while most homes bought were for the purpose of self-dwelling, purchasing for family members and for investment.

In terms of unsold units, 64% of respondents reported to have unsold residential units in the period under review, with the majority of them having less than 30% unsold stock for both residential and commercial types.

At 30%, terrace houses had the highest percentage of unsold residential type, followed by semi-detached/bungalow at 29% and apartment/condominium at 26%.

Rehda said end-financing issues continued to be the main reason for loan rejection in H2 of 2020, which affected 92% of respondents. Other top reasons were unreleased bumiputra units and low demand/interest.

Separately, Rehda said the overall cost of doing business increased by 12% in H2 of 2020, according to 51% of the respondents.

The survey revealed that 98% of respondents were affected by the current economic scenario, while those that were “highly and severely affected” increased to 42%, compared with 26% in H2 of 2019.