SYDNEY: Asian stocks were on the backfoot on Wednesday while the safe-haven dollar held near a one-year high as Treasury yields resumed their upward march, hitting sentiment even as Chinese data underpinned signs of a solid global economic recovery.

The lead for Europe was weaker too, with futures for eurostoxx 50, Germany's Dax and London's FTSE off 0.2% each. E-mini futures for the S&P 500 were barely changed.

MSCI's broadest index of Asia-Pacific shares outside of Japan eased from a one-week high of 682.36 points to be last at 678.22 to drift further away from an all-time peak of 745.89 touched just last month.

For the month so far, the index is down 2.2% to be on track for its first loss in five months. It is poised for its fourth consecutive quarterly gain though it would be the smallest increase since a 21% fall in March 2020 when the coronavirus pandemic brought the world to a standstill.

"Markets are watching closely to gauge the damage and potential ripple effects caused by the Archegos Capital Management crisis," ANZ analysts wrote in a note.

Some global banks are facing billions of dollars in losses after U.S. investment firm Archegos Capital Management LP defaulted on margin calls, putting investors on edge about who else might be exposed.

"For some this serves as a timely reminder that while pandemic risks are abating, financial market risks remain elevated," ANZ added.

The risk-off mood lately has been set off by a surge in bond yields. U.S. Treasury yields skyrocketed 83 basis points just this quarter, the biggest increase in over a decade, making equity valuations look lofty particularly for major tech companies which have borne the brunt of the sell-off.

"Tech is a diverse sector and the driver of higher yields matters more than the rise itself," Blackrock said in a note to clients.

"Our new nominal theme implies central banks will be slower to raise rates to curb inflation than in the past, supporting our pro-risk stance and preference for tech."

Over a 6-12 month period, Blackrock is "overweight" equities and "underweight" U.S. Treasuries, expecting a nominal increase in yields.

"This makes equities even more appealing than bonds in a multi-asset context - and suggests any further sell-offs in tech may present opportunities."

Sentiment in Asia remained downbeat despite data showing China's factory activity expanded at a faster-than-expected pace in March while the country's services sector surged too.

Chinese shares started in the red and deepened their losses, with the blue-chip index off 0.9%. Hong Kong's Hang Seng index slipped 0.4%.

Japan's Nikkei slid 0.9% as the country's industrial output fell in February due to declines in the production of cars and electrical machinery.

Australia's benchmark index bucked the trend to be up 0.8% while New Zealand rose 0.9%.

In foreign exchange markets, currencies were mostly a sea of red against the U.S. dollar which hit a one-year high of 110.48 against the yen as investors bet that massive fiscal stimulus and aggressive vaccinations will boost the U.S. economic recovery.

The dollar is on track for a third straight monthly rise against the yen and its biggest since end-2016.

The dollar index held above 93 after surging as high as 93.357 on Tuesday. It has climbed from close to 90 at the start of March, on course for its best month since 2016. 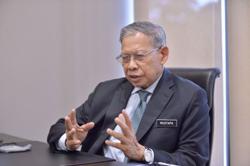