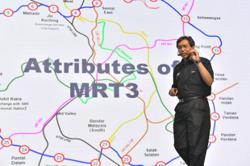 The construction giant also posted a lower revenue of RM895.41 million in the same period from RM1.09 billion previously.

In terms of property segment, Gamuda said sales jumped by 50 per cent in 1H21, with overseas sales, especially Vietnam and Singapore, continuing to spearhead the group’s property division and contributing two-thirds of overall sales.

"The property division sold RM1.5 billion worth of properties in 1H21 compared with RM1 billion in the same period last year, mainly driven by overseas sales especially from Vietnam and Singapore,” it said.

On prospects, Gamuda anticipated that this year’s performance would be driven by overseas property sales, especially from Vietnam and Singapore, as well as the continued progress of the Mass Rapid Transit (MRT) Putrajaya Line (formerly called MRT Line 2).

"Moving forward, the resilience of the group is underpinned by its construction order book of RM5.5 billion and unbilled property sales totalling RM3.6 billion which will see it through the next two years.

"On top of that, the group has a healthy balance sheet with a prudent gearing of 0.3 times,” it added. - Bernama